The European Economic and Social Committee (EESC) and the European Commission unveiled an updated Protocol on Cooperation. The document further consolidates and intensifies the political and legislative cooperation between the two organisations, as well as their joint efforts to communicate about Europe. It strengthens the Committee's strategic function vis-à-vis the EU institutions as well as its role with regard to the implementation of the European Citizens' Initiative and within the European semester, a key economic and fiscal policy tool in the recovery.

Ten years after the last revision of the Protocol on Cooperation, first signed in 2005, the EESC and the Commission deemed it crucial to update it in order to reflect the challenges of the current political European agenda, and to provide the tools and processes to address them. Through this renewed partnership, both organisations also acknowledge the essential role that organised civil society has to play in achieving an EU that is economically prosperous, socially inclusive and environmentally sustainable.

EESC president Christa Schweng: The revised cooperation agreement will allow us to have more strategic, forward looking and deepened cooperation with the Commission". She added: "A significant novelty in the Protocol is the commitment to jointly identify five subjects for exploratory opinions annually, once the Commission has adopted its work programme. This is a very important point for us, allowing us to work in a more forward-looking way. We will heavily invest in this.

Faced with a unique set of crises this year, our Union has shown once again just how much it can achieve when it is united, pulling in the same direction. This revision of the Protocol will ensure the ways we cooperate are more suitable for the times we live in and the challenges we face, said Maroš Šefčovič, Commission's Vice-President for Interinstitutional Relations and Foresight. It also reiterates the important role the Committee plays in the development of our policies, with the synergies between us contributing to the smooth functioning of the EU.

The revised Protocol on Cooperation further consolidates and intensifies the political and legislative cooperation between the EESC and the Commission. Various new aspects have been introduced concerning the EESC's reinforced contribution to better law-making:

In the future, the Commission and the Committee may also identify ways to strengthen their cooperation when it comes to following up on the proposals of the Conference on the Future of Europe.

The Commission and the EESC will collaborate more extensively in the area of communication, with the aim of bringing the EU closer to its citizens. This will enable the European institutions to draw on the Committee's expertise in communicating at both national and EU level.

Finally, the document explores the possibility of cooperation in the field of media monitoring, and acknowledges closer cooperation with the Commission Representations, including harnessing their support when organising the Committee's local events. 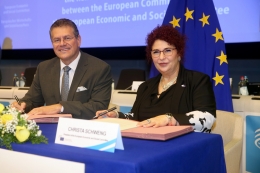 Protocol 2022 on cooperation between the European Commission and the European Economic and Social Committee
Latest update:
Downloads: