Today marks exactly one calendar month since the invasion of Ukraine on 24 February. Like most, I am still reeling from the shock and incomprehension. How is it possible that we have returned to war on the European continent, 77 years since the end of World War II?

Perhaps we have been naïve. And I cannot help but recall the acceptance speech of Mr Herman Van Rompuy, former President of the European Council, when in 2012 he received the Nobel Peace Prize to the EU. In a very personal and moving speech, Mr Van Rompuy stated (and I quote): Peace is now self-evident in Europe. War has become inconceivable. Yet 'inconceivable' does not mean impossible.

The Russian invasion of Ukraine, represents the largest, most violent and unprovoked aggression on the European continent since 1939. The invasion has quite literally 'dug-up' generations of fears and memories of Soviet rule over Central and Eastern Europe and the Baltic States.

Unfortunately, war is as old as Europe. And as the 'father of history', the historian Herodotus lamented 25 centuries ago: In peace, sons bury their fathers. In war, fathers bury their sons.

For these reasons, in the draft resolution on the war in Ukraine we as rapporteurs have tried to capture this sense of enormity of the human cost of the invasion. We have saluted citizens and civil society organisations which have selflessly taken great risks to help refugees. And we have insisted on the necessity for the EU to live up to its ultimate objective, which is the preservation of peace. This entails maintaining EU solidarity and generosity towards the people of Ukraine, at the same time as protecting our European borders.

However, we must also not forget the Russian citizens, who have seen their political, social and economic rights completely trampled upon by the regime of Putin and who are now fleeing the country in their thousands. One of the most terrifying aspects of the last four weeks has been witnessing the re-Stalinisation of Russia! As was written in a recent article in the Economist, When Vladimir Putin ordered the invasion of Ukraine, he dreamed of restoring the glory of the Russian Empire. He has ended up restoring the terror of Josef Stalin.

In conclusion dear colleagues, I strongly commend this draft resolution and call upon all Members to support it. 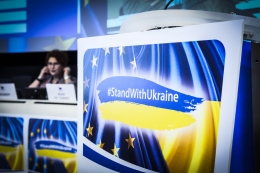