Statement by
Christa Schweng, President of the European Economic and Social Committee (EESC), and António Costa, Prime Minister of Portugal, on the occasion of their bilateral meeting
Related content See also

Portugal has taken on the Presidency of the Council of the European Union for the fourth time in its history, with the motto "Time to deliver: a fair, green and digital recovery".

During their meeting on 27 January 2021 EESC President Christa Schweng and Portuguese Prime Minister António Costa stated that, at a time when everything was becoming a matter of urgency – vaccination, economic recovery, the climate and digital transitions, and the relaunch of the European Pillar of Social Rights – it was especially important to focus on quality delivery.

To set the economic and social European recovery in motion, the prime minister and EESC president agreed that we must ensure that the resources from the recovery and resilience fund arrive swiftly to our citizens and businesses and put the EU Pillar of Social Rights into practice, as a basis for trust in the twin climate and digital transitions, leaving no one behind.

"For this reason, the central event of our Presidency will be the Social Summit, which will take place in Porto in May, with social partners, civil society, and presidents of institutions and Member States", said Mr Costa.

"The main objective of the Social Summit", he added, "is to give a strong political impetus to the Action Plan, which the Commission will be presenting in March and which makes the desire expressed by our citizens to put into practice the 20 General Principles proclaimed in Gothenburg, in November 2017, a reality."

Prime Minister Costa also said that "to achieve this fundamental objective the Portuguese Presidency is counting on the important contribution and active participation of the European Economic and Social Committee".

"The EU social summit in Porto is an important step to further pave the way for our future social, societal and economic model in Europe. The EESC is looking forward to participating in the event and is committed to providing strong and timely input based on the practical experience of EESC members", said EESC President Christa Schweng.

She underlined that the Committee was very much looking forward to close cooperation with the Portuguese Presidency, especially through exploratory opinions requested by the Portuguese government. These focus on teleworking, vocational training, skills and the role of the social economy in the creation of jobs and in the implementation of the European Pillar of Social Rights.

"Putting forward a Charter of Digital Rights, fostering the uptake of digital tools by governments across the EU, and using funds from the EU's recovery package to work towards a digital and green economy where nobody is left behind are much-needed initiatives", said Ms Schweng. "The EESC is willing to actively contribute to these proposals."

EESC and the Portuguese Presidency

The EESC will contribute to the work of the Portuguese presidency to ensure that the voice of Europe's civil society is heard. In particular, the EESC will share the views of civil society on the following topics, through seven opinions it is preparing at the presidency's request:

Portuguese Presidency of the Council of the European Union
imprensa 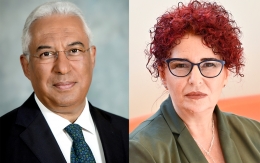