The EESC proposes launching a European pact to effectively combat tax fraud, evasion and avoidance and money laundering. The Committee calls on the European Commission to promote a political initiative involving national governments and the other European institutions in achieving this goal, fostering the consensus needed for this and involving civil society. Cooperation between Member States should be the main pillar of the pact. The Committee urges the European institutions and the Member States to provide the financial and human resources required for the effective implementation of existing European legislation and to agree on a commitment to adopt all necessary new legislative and administrative measures to effectively combat tax offences and bad practices, money laundering and the activities of tax havens. This requires permanent evaluation of the outcome of implementing each measure.

While acknowledging the progress made by the Commission in taking account of smaller and less complex banking institutions in its recent regulatory measures, the EESC believes it would be useful to further increase the proportionality of banking rules, without sacrificing the effectiveness of prudential rules.

The EESC endorses the recent decision to push back the date for implementing the Basel III accord, and feels that when the time comes, the new provision on capital requirements should be transposed in a way that caters properly for the diversity of banking business models in Europe.

No green deal without a social deal

Own-initiative opinion postponed to the autumn

The purpose of the opinion is to examine the extent to which existing EU company law currently serves as an "expedient" for the politically-desirable Green Deal and which gaps still need to be closed, in particular regarding corporate social responsibility obligations. The opinion will aim at following-up on the European Commission's initiative on due diligence and broadening the debate on sustainable corporate governance interlinking the social, environmental and economic dimensions.

Udvalgets udtalelse: Towards a more resilient and sustainable European economy (own initiative opinion)

European Philanthropy: an untapped potential (Exploratory opinion at the request of the Romanian Presidency)

The objective of the opinion, requested by the Romanian Presidency, is to explore which measures and initiatives should be taken at EU and national level in order to promote organised philanthropy and eliminate barriers within the internal market that are hindering the realisation of its full potential, so as to maximize its contribution to EU values, such as cohesion, social justice and European Policies, and to the competitiveness of the European economy.
The opinion is expected to feed into the Romanian presidency programme and into the political priorities for the new Commission.

Udvalgets udtalelse: European Philanthropy: an untapped potential (Exploratory opinion at the request of the Romanian Presidency)

The EU acknowledges the increasing importance of including the EU and partner countries' companies in the GSCs. It is also emphasised that the current interdependence of the economies may further increase due to the recently negotiated and implemented EU trade and investment agreements, as well as negotiations at the WTO. The EESC also recommends cooperation between international organisations and other relevant stakeholders. This would include adopting a common language and common definitions of elements related to global value chains, GSCs and decent work, and comparison and assessment of the statistical data between the various stakeholders, such as the OECD, the International Labour Organisation (ILO), WTO, the European Commission, the World Bank and IFM. This should help avoid confusion and misinterpretation, and support elaboration of a coherent policy between diverse public bodies involved.

The Information Report can serve as a tool to promote and share the rich experience of the EU and its Member States in the area of CSR with partner countries and their civil society. It can provide a basis for discussion in EESC dialogues with partner countries, as well as the Committee's contribution to the work of the monitoring mechanisms established by the recently negotiated EU trade agreements. 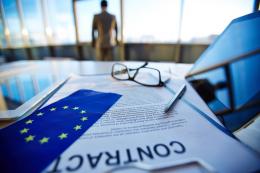 Trade for all, a lever for a fairer global system
News

Can European trade and investment policy promote sustainable development and social justice at home and abroad?

Setting out its positive agenda for business while insisting on the importance of promoting European values, the European Commission’s new ‘Trade for all’ Communication is a timely update on EU trade and investment policy, according to a recently published opinion by the European Economic and Social Committee (EESC).