Empowerment is the key to a successful European Climate Pact, says the EESC

On one of the most important weeks of the year for climate action, with the fifth anniversary of the Paris Agreement, the European Council on Climate, and the launching on 16 December of the Climate Pact by the European Commission, the European Economic and Social Committee (EESC) calls upon ownership and empowerment of civil society as a precondition to success.

The EESC is delighted to see its recommendations reflected in the Commission Communication on the European Climate Pact published on 9 December. The Climate Pact, based on genuine participation and ownership by local climate actors, can be a vehicle for delivering on the EU's climate ambition, but it must focus on empowering people to change the systems that led us to the brink of the climate crisis – through exploration, experimentation and demonstration. As the EESC called for in its recent opinions, the Climate Pact should support existing and new climate action via peer-learning, education, capacity-building, removing barriers and facilitating access to finance.

Five years after the landmark Paris Agreement, the world is not on track to meet its objectives. We are facing a critical climate emergency: the year 2020 is set to be one of the three warmest years on record; the past decade was the hottest in human history. Ocean heat is at record levels, with widespread marine heatwaves, and the Arctic saw exceptionally warm temperatures. The UN Environment Programme Production Gap Report, released on 2 December, showed that countries are aiming to produce 120% more fossil fuels by 2030 than would be consistent with limiting global warming to 1.5°C.

Ownership by local climate actors as a precondition

By introducing the concept of global carbon neutrality, the Paris Agreement changed the political discourse and put governments and stakeholders on an action-oriented pathway. This outcome would not have been possible without the unprecedented mobilisation of civil society stakeholders including trade unions, businesses, NGOs, communities, cities and regions. The EESC has continuously stressed that civil society and citizens are crucial partners in the fight against climate change, because active participation of "all parts of society" is a necessary condition for climate policy to be successful within the EU. We need a shift from mere consultation and top-down decision-making to co-design, co-creation, bottom-up and empowerment. Individuals, organisations and enterprises need to be offered genuine opportunities to participate in decision-making and become equal beneficiaries of the overall climate action, if they are to commit time and energy to the process. Direct dialogues with citizens raise awareness of the importance of a transition to more sustainable societies and contribute to healthier local communities.

One way of enhancing climate ambition is to create enabling environments for more action from non-state actors. We need to go beyond commitments and pledges and encourage a broad participation that in turn can mobilise further climate action. Existing national, regional and municipal-level examples of citizens' assemblies and citizens' dialogues demonstrate clearly the capacity and desire of citizens to take responsibility for climate crisis solutions. Recognition and credible communication of existing actions may provide a strong stimulus to take further climate action. Funding and other resources, specialist support and the power to help shape decisions that impact on their work will enable the wider application of proven approaches. The overall challenges identified most by civil society actors for engaging in climate action are a lack of access to finance, a lack of expertise, a lack of staff and a lack of recognition, as well as the absence of a consistent narrative from the EU and national governments.

Commenting on the publication of the Communication, Peter Schmidt, the President of EESC Section for Agriculture, Rural Development and the Environment, said, the Climate Pact is an important opportunity to model an innovative participatory approach, which will mirror, support and inspire action already happening in civil society, within communities, cities and regions. We look forward to building this Pact together with the Commission.

We need mechanisms to act on climate actors' needs – let's give them the resources to act!

The EESC wants to engage with the European Commission and other EU bodies to co-create a European Climate Pact Stakeholder Platform, based on the principles of inclusiveness, transparency and genuine participation and ownership by climate actors at all levels. In our view, participatory models, which are too narrowly focused, will serve only to distract and disillusion those who engage.

The EESC Vice-President for Communication, Cillian Lohan, who was also the Rapporteur of the EESC Opinion on facilitating access to climate finance for non-state actors, said, Capacity-building and finance support will be an essential element of the Pact, serving to provide guidance, information and education on climate policies and strategies, as well as to facilitate access to finance for small-scale projects.

Setting up an EU Climate Finance Forum as part of the Pact would stimulate truly mutual learning processes, access to finance and remove barriers. Appointing members of the EESC as EU-level ambassadors for the constituencies they represent would build on their extensive networks among civil society to reinforce the Pact. Moreover, the youth engagement mechanism on climate and sustainability, like the Youth Climate and Sustainability Round Tables proposed by the EESC, should be an integral part of this Pact, facilitated by youth organisations. 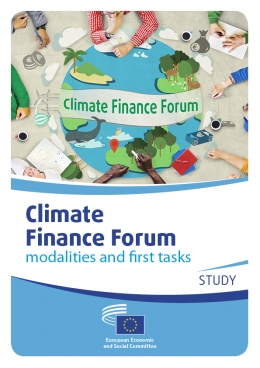