This year's Your Europe, Your Say! (YEYS) event, entitled 'Our Climate, Our Future!' took the form of a COP climate negotiation, empowering students to engage with climate solutions, and brought together online 234 teenage students and 56 teachers from 28 European countries.

The students' proposals were as follows:

The youth movement has shown that change can come from the streets. Today we help those demands for more action to resonate in the corridors of power. 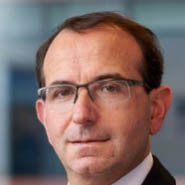 Gianluca Brunetti, Secretary-General of the European Economic and Social Committee

The EESC works as a bridge between the EU institutions and civil society, and so listening to young European citizens is a very important part of our activity.

We need a green transition to a green economy that leaves no one behind. This means boosting green investments, promoting new lifestyles and forms of consumption. To achieve this, we need active citizens. This starts with involving young people! 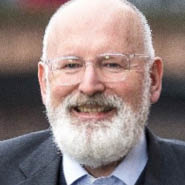 You have to help me and my generation and your parents' generation to change in order to give you a future. With your help, I'm sure we will convince the entire population. 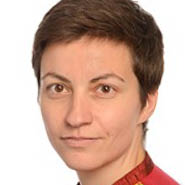 Ska KELLER, Co-President Greens/EFA in the European Parliament
Without public pressure we wouldn't have got as far as we are now! 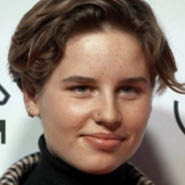 Anuna de WEVER, Climate activist
Dare to think outside the box and be brave enough to imagine a different world! We need young people to lead this change! 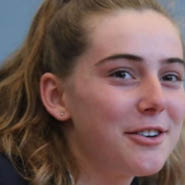 Adélaïde CHARLIER, Climate activist
We have to start communicating to citizens on the real crisis that we are facing! We expect more ambition from the European Union and must make sure that we stay coherent in our policies! 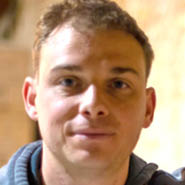 Samuel MASSE, President of the European Council of Young Farmers
European young farmers are committed to playing a role in tackling climate change and building a more sustainable Europe

Quotes from the students

Relja (Serbia) - Humanity has been pumping greenhouse gases into the atmosphere for decades and they’ll stay there if we don’t do something about it. We have to make right what the past generations have done wrong.

Birsen (Bulgaria) -  By working together, we have proven that we can achieve greatness and efficiency. The results from this amazing project, including phenomenal people, show it.

In line with the organisation of a COP, the EESC organised a side event for young people. The event brought together experts, activists and influencers to share their knowledge and expertise regarding climate change in the context of systemic change. The audience was invited to share their views on the changes they would like to see from their governments.

The young audience actively participated in the debate, expressing their will for more action, more cooperation, and more decisiveness from their government in the fight against climate change. It also came out that the main sources of inspiration for a more sustainable live are activists and the youth movements.

The speakers involved for the 'side event' were:

Cillian LOHAN, EESC Vice-President
We have to be bold and create a system where the ethical and right choice is the default choice! 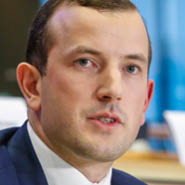 Virginijus SINKEVIČIUS, Commissioner for the Environment, Oceans and Fisheries, at the European Commission
Our environment is facing 4 urgent crises: climate change, biodiversity loss, resources depletion, factory pollution. They are all connected, so we should tackle them together. Our political priority, is the EU #GreenDeal 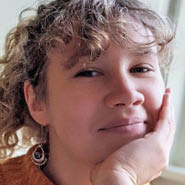 Josephine BECKER, Climate activist, writer and student
The more people we are, the more solutions we can create. Be as outrageous as you can be and don’t be afraid to challenge the status quo! 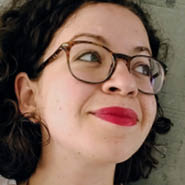 Corina ANGHELOIU, Principal Design Strategist for the global sustainability non-profit Forum for the Future
When we talk about system change is not really like baking a cake, we do not have a recipe, but more like rising a child, do your best, but at the end of the day, the sum of the parts are bigger than the individual ones. 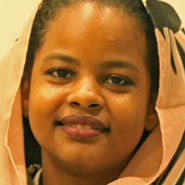 Nisreen ELSAIM, Climate activist and Chair of the UN Youth Advisory Group on Climate Change
Climate action is not a choice. It’s a moral commitment. 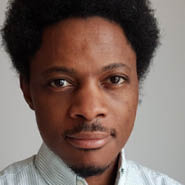 Lewis AKENJI, Managing Director at the Hot or Cool Institute
We are just around the fringes not about the core of the economic system. We need to change the system for the well-being of our planet.

Saoi O'CONNOR, Climate Activist
People are unwilling to step into something that is unfamiliar or unknown, or scary, and we need that from our leaders. People have to change their priorities, not just on the individual level, but on that systemic level, and do what it is needed from them. 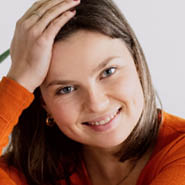 Juliet BONHOMME, Slow fashion campaigner
I discovered that inspiration and showing the example was the greatest way to make people act. So just showing what you want to do in a good way, with your own motivation, I think it's the best inspiration you can have and the most impact you can have too, because when you want people to act or you want to change their behaviour, it won't work. 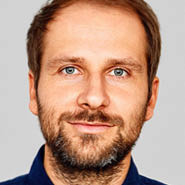 Christian KROLL, Ecosia founder
People behave in a very climate unfriendly way, but I realised that people don't have the right context, the right understanding about climate change. Once people really understand climate change, they will also probably start acting differently. The only person that can change is yourself.

In addition to the discussions, the audience had the possibility to discover systemic change through art, with comments from the young audience being translated into art works: 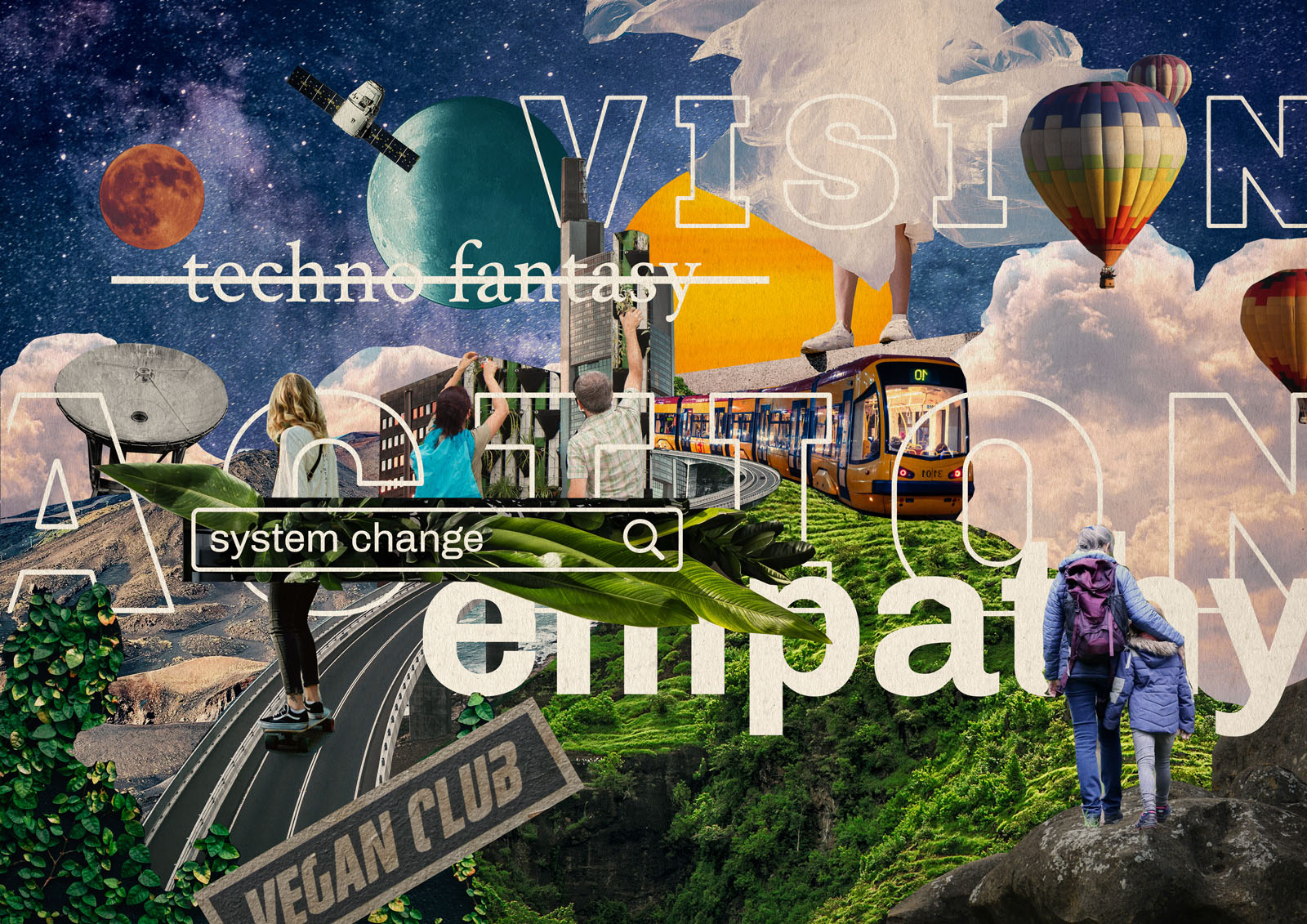 A storyboard/visual representation of the whole event was also produced by Esther Blodau, and used for social media mainly, after the event. 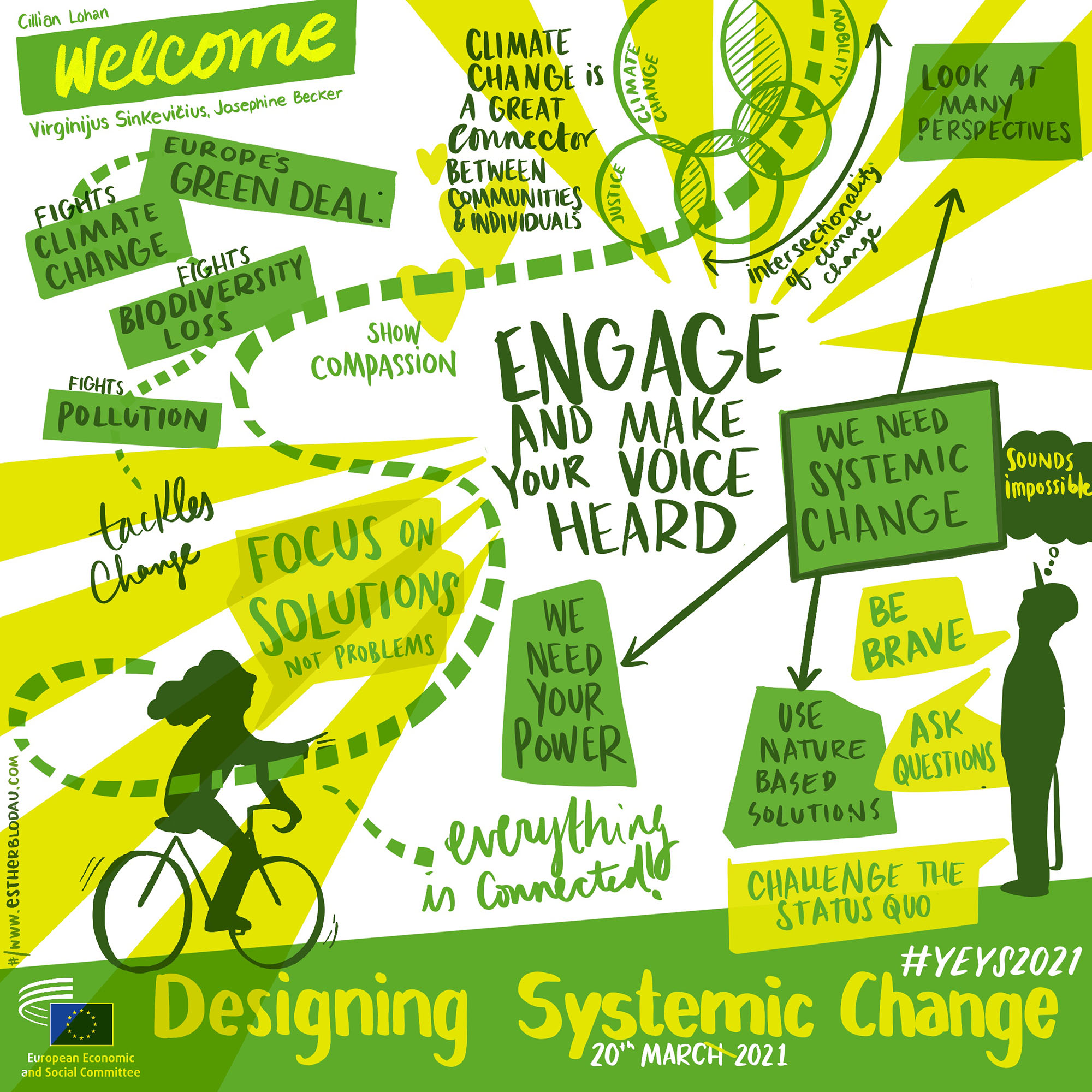 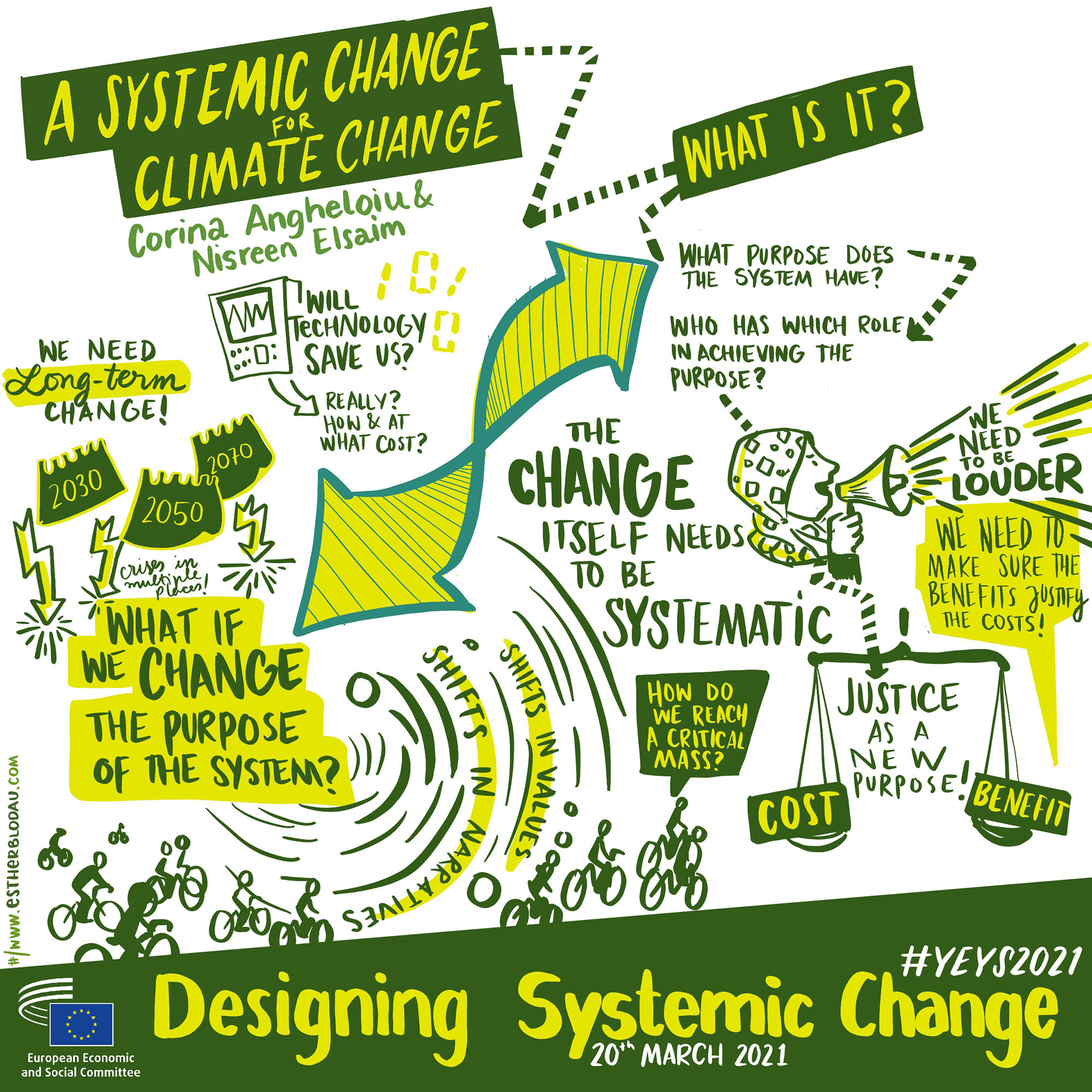 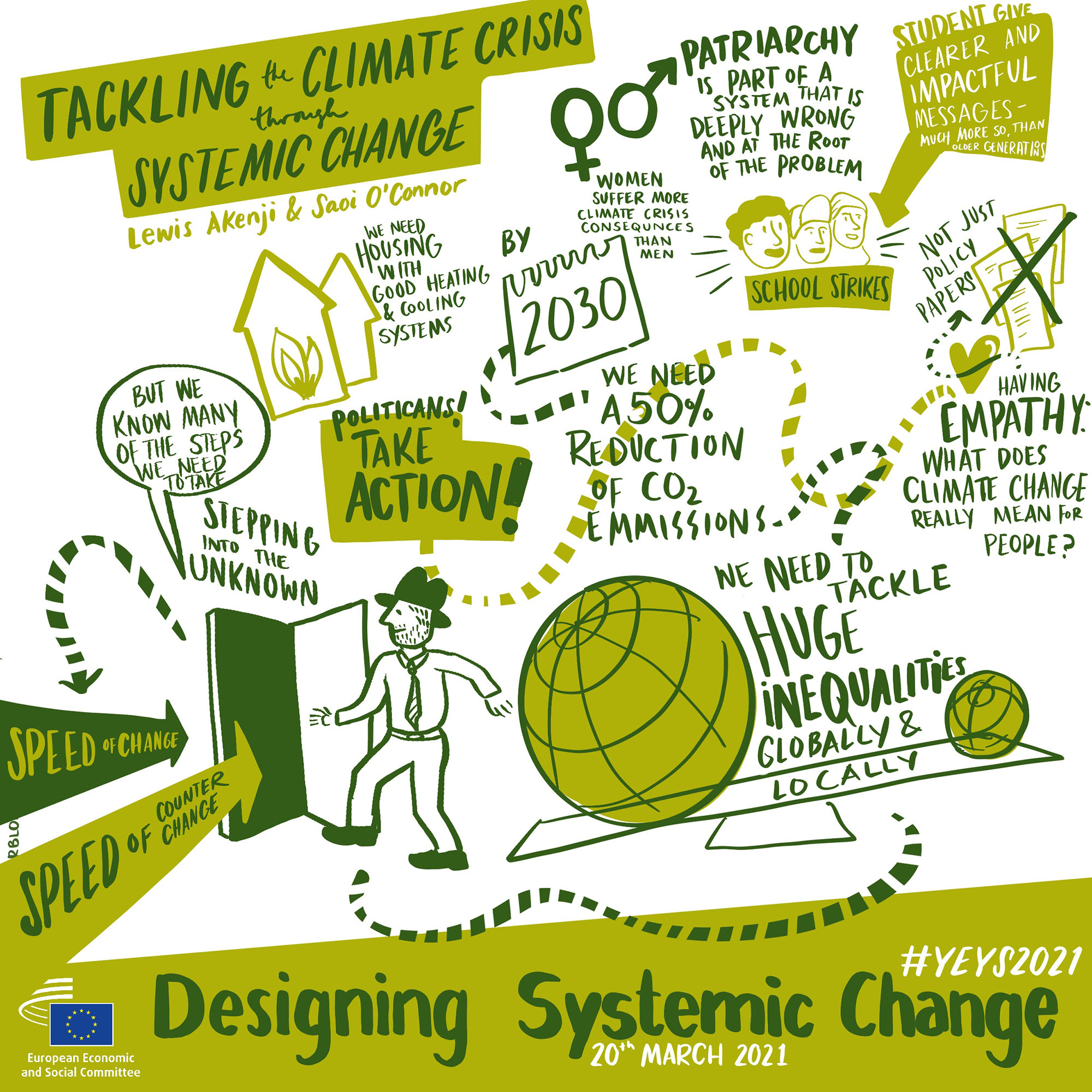 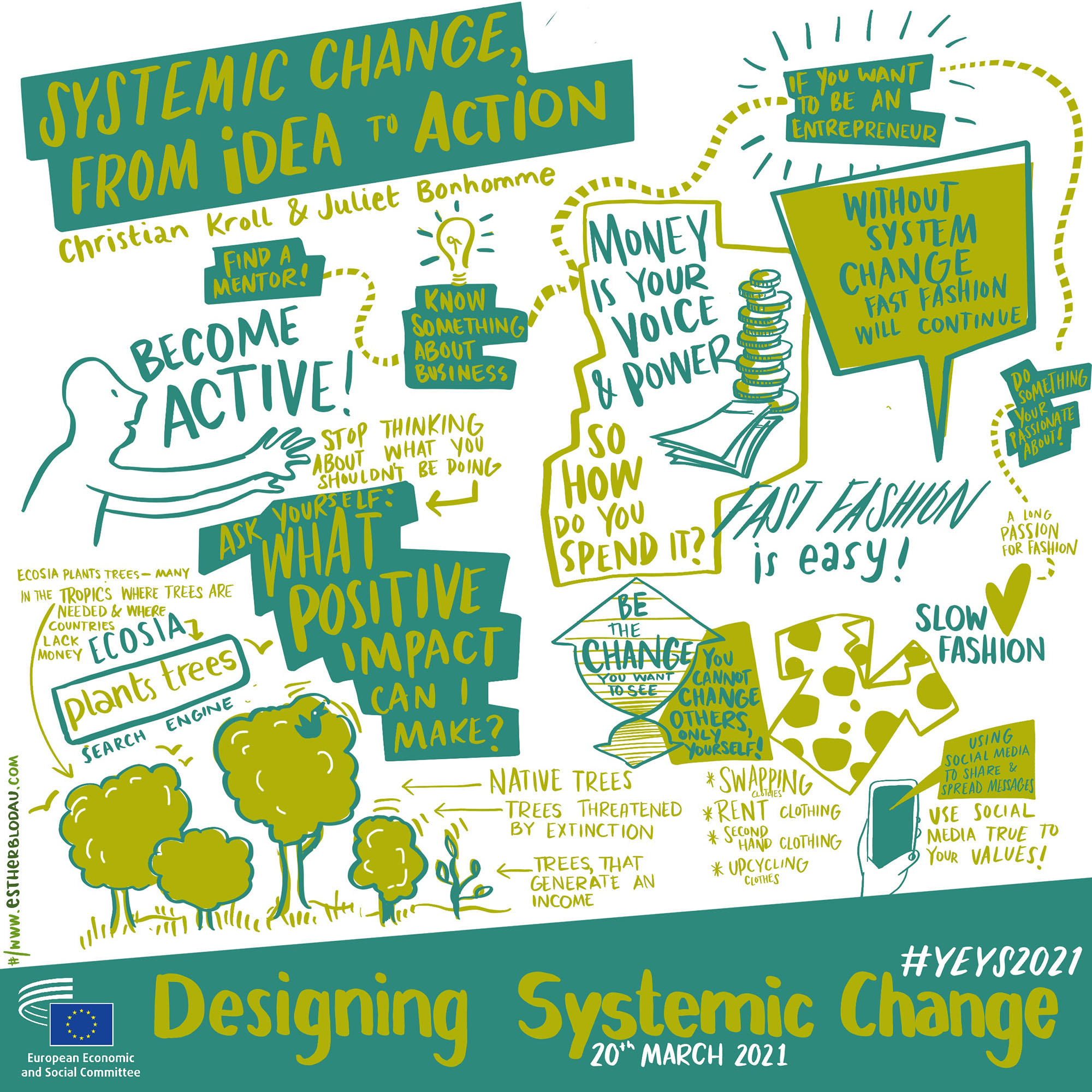 YOUR EUROPE YOUR SAY 2021 - CONCLUSIONS