Pay transparency: binding measures are necessary but not sufficient to reduce the gender pay gap, says the EESC

The European Economic and Social Committee (EESC) welcomes the Commission's initiative on binding pay transparency, but considers that the proposed Directive should be strengthened in various areas and that further measures need to be taken to address the root causes of the gender pay gap.

In its opinion adopted on 9 June by 147 votes to 88, with 11 abstentions, the EESC welcomes the Commission's proposal for a directive on binding pay transparency measures, which will help workers to enforce their right to equal pay in cases where they have been victims of pay discrimination by strengthening the role of national bodies and increasing transparency in pay structures. However, the proposed Directive should be strengthened in a number of areas, including the criteria used to determine the value of work, the scope of some transparency measures and the role of social partners and collective bargaining.

The "equal pay for equal work" principle applies to "categories of workers" that, under the Commission's proposal, are specified by the employer. The EESC believes that it is crucial for there to be mechanisms to ensure that categories of workers are determined in a gender-neutral way, for instance with the involvement of trade unions and workers' representatives, in accordance with national law and practice.

Scial partners should play a role in further developing the objective criteria to be used to determine the value of work. These criteria should include skills required in jobs typically performed by women, such as people-centred skills, since these are often undervalued. The opinion's rapporteur, Pekka Ristelä (Group II, Workers), said: References to workers' representatives are very vague in the Commission's proposal, and it is even explained that in some cases employers could designate workers' representatives. We need clearer definitions that respect freedom of association, the right to organise and the right to collective bargaining. It is also important to ensure that the social partners can play a strong role, and that workers have the support of their trade unions.

The Commission is proposing measures aimed at enhancing the availability of information on pay, including prior to employment, and transparency in pay structures. Companies with less than 250 workers are exempt. The EESC opinion states that these new obligations could represent a significant burden for SMEs, but that this exemption is nonetheless not justified. The threshold of 250 employees is too high, said Mr Ristelä, because two thirds would not be able to benefit from these improvements. In line with the Commission recommendation on pay transparency (2014), the threshold should not be higher than 50 employees. Mr Ristelä went on to add that binding pay transparency and improved access to justice are important in making sure that pay discrimination and gender-biased pay structures are identified and addressed, and we must make sure that the benefits of the directive are not limited to workers in big workplaces only.

Furthermore, the EESC believes that Member States could help employers with training and technical assistance concerning their pay transparency obligations. This would include developing tools and methodologies for calculating pay gaps. Member States should also make use of the possibility to compile information on pay gaps across organisations themselves, particularly in respect of small and medium-sized enterprises.

The EESC points out that that the measures contained in the proposal are only some of the steps needed to address the structural issues underpinning the gender pay gap.

While the EESC as a whole fully supports the principle the principle of equal pay for men and women for equal work or work of equal value and recognises it as one of the fundamental rights and principles of the EU, the number of amendments put forward to this opinion shows the difference in views on the measures needed to reduce the gender pay gap.

Mira-Maria Kontkanen (Group I, Employers) said: We do not believe the directive will solve the pay gap issue. Binding pay transparency measures will not address the major root causes, which lie in issues such as horizontal and vertical labour market segregation, full-time versus part-time work, unpaid care-related constraints and tax-related disincentives to women's employment". "The greatest shortcoming of the proposed directive, she explained, is that it does not take sufficient account of the diverse national social and industrial relations models or judicial systems and legal traditions in the Member States. We believe it should be reworked or withdrawn as there are more efficient and proportionate measures than binding legislation to address these issues without increasing the administrative burdens and costs for companies, in particular SMEs.

For these reasons, members of the EESC's Employers' Group lodged a large number of amendments, and all of them voted against the opinion. These amendments will be attached to the opinion, as they got over 25% of the vote.

Cristian Pîrvulescu (Group III, Diversity Europe) thinks that this proposal should be supplemented by legal measures to prevent segregation on the labour market, which is the consequence of perpetuating gender stereotypes and leads to women's work being underestimated. Without efforts to impose a set of standards on EU Member States, he said, the gender pay gap will continue to be a major problem in our society.

Further measures aimed at addressing the structural issues at the root of the gender pay gap should also include guaranteeing adequate and accessible childcare, awareness-raising initiatives, ensuring better representation of women in decision-making positions, and eliminating tax-related disincentives to women's employment.

The EESC encourages measures that promote social dialogue, the discussion of equal pay and the development of gender-neutral job evaluation schemes by the social partners, awareness of equal pay issues among them, and sharing of best practices. Moreover, the ability of trade unions and workers' representatives to act on behalf of workers should be strengthened, including by giving them the right to request information on pay levels, broken down by gender, for categories of workers.

On 4 March 2021 the European Commission presented a proposal on pay transparency to ensure that women and men in the EU get equal pay for equal work. The proposal sets out pay transparency measures, such as pay information for job-seekers, a right to know the pay levels for workers doing the same work, and gender pay gap reporting obligations for big companies. On 5 May, the EESC held a hearing on the Commission's proposal. 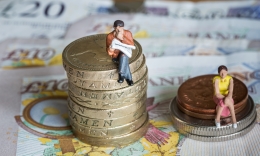