On 26 November stakeholders including the European Commission, the Parliament and the Council, think tanks, social partners and civil society organisations took part in a virtual hearing on the New Pact on Migration and Asylum. The conference, organised by the Social Affairs section (SOC) of the EESC, explored whether the new pact brings about the systemic change necessary to overcome the current deadlock and develop a sustainable, rational and rights-based EU asylum and migration policy.

Criticism from different panelists focused on three main aspects: the chosen legislative path, underpinned by intergovernmentalism and allowing negotiations to start before the submission of a legislative proposal by the Commission; the dualistic understanding of migrants as either real refugees or expellable illegal individuals; and the newly introduced return sponsorship mechanism, allowing Member States to contribute to solidarity by carrying out other countries' expulsion procedures.

The members of the EESC study group on this initiative regretted that the pact devoted most of its proposals to the management of external borders, while failing to pay due attention to regular channels of immigration, safe pathways for asylum, or the inclusion and integration of non-EU nationals in the EU. We are a bit disappointed by the content of this pact, said José Antonio Moreno Díaz, EESC rapporteur for the opinion on the New Pact on Migration and Asylum. We hope for a more ambitious and constructive pact that is more realistic with respect to human rights.

Position of the co-legislators

William Sleath, director for Citizens, Health, Migration and Security Union in the Secretariat-General of the European Commission, detailed the four pillars of the Commission's plan. These can be summarised as follows:

Ralf Lesser of the Asylum Law and Asylum Procedure Unit in the German Federal Ministry of the Interior said that the rest of the German presidency of the EU Council would be used to push forward negotiations on the pact. Differences remained between Member States on some of its key elements. Several Member States welcomed the new concept of return sponsorship, but there were still many questions about its practical implementation. Some EU countries continued to reject the idea of mandatory relocation. The German presidency was in favour of upgrading the EASO (European Asylum Support Office) to make it an asylum agency.

Juan Fernando López Aguilar, chair of the European Parliament's LIBE Committee, promised that Parliament would do its best to raise the level of this package. It is called a pact, he said, but it is not yet a pact. To become one, it needs to be agreed with the European Parliament. He was particularly critical of the European Commission's obsession with reinforcing border controls as well as with returns, and deplored the compromise on flexible solidarity, which allows Member States to sponsor returns of migrants who have arrived in other Member States. We urge a holistic approach, he added, not one based on sending migrants back home. He concluded by calling for a change in the narrative: migration could be an asset, for the greening of European society, the sustainability of our social security systems, and the capacity to increase European diversity.

Sergio Carrera, head of the Justice and Home Affairs Programme at the Centre for European Policy Studies (CEPS) and Professor at the Migration Policy Centre (MPC) and the European University Institute (EUI), set the tone for the overall criticism of the pact. He highlighted three main key findings from his research:

Whose pact is this? he asked. Calling it a pact is rather misleading, because it was not concluded between different parties. This is simply the European Commission policy agenda for the next years. If we look at the Treaties, the decision-making should start after the Commission presents legal acts, not before.

Strong disapproval against the return sponsorship mechanisms was voiced by Olivia Sundberg Diez and Alberto Horst-Neidhardt, policy analysts at the European Policy Centre, who also underlined how faster procedures might undermine the international right to asylum.

Robert Plummer, senior adviser in the Social Affairs Department of BusinessEurope, stressed that seasonal third-country workers are very much valued and needed by employers in the European Union. Moreover, there was a need for skilled migrants across all sectors and all levels. He stressed the need to improve legal pathways to economic migration: It would be very welcome if we could conclude the negotiations on the Blue Card directive. He thought the Talent Partnerships measures proposed in the package were interesting and merited further discussion.

According to the European Trade Union Confederation (ETUC), the pact had not provided a fresh start in managing migration but further perpetuated the previous security-oriented approach, with a strong focus on border control, deterrence, detention and deportations. It left very little room for regular migration, where proposals continued to be postponed. ETUC advisor Mercedes Miletti condemned the strong focus on detention and deportation in the pact, as well as its lack of any reference to the Global Compact for Migration. On the subject of labour migration, she said: We cannot turn a blind eye to the numbers of undocumented workers who are performing essential work on the frontline against the Covid-19 pandemic. We must be able to find a solution.

Catherine Woollard, director of the European Council on Refugees and Exiles, argued that the positive alternative approach of making asylum work in Europe had not been adopted. The new set of proposals would reduce protection standards, while not improving the efficiency of the system. At the same time she drew attention to two positive things: the continuing optimistic rhetoric on asylum and migration, heard especially from Commissioner Johansson, which contrasted very favourably with the approach of the previous Commission; and the increased emphasis on access to asylum and tackling violations at the borders. We would urge the Commission to continue along those lines, she said.

On 23 September 2020, the European Commission presented the New Pact on Migration and Asylum. The pact is a working agenda which focuses on three main areas: improving cooperation with non-EU countries of origin and transit in order to improve migration management; improving management of the EU's external borders, stepping up technical cooperation and identification mechanisms, and amending and updating procedures to ensure greater clarity in the allocation of responsibilities; establishing a new permanent mechanism for solidarity.

After setting up a study group and holding the hearing, the European Economic and Social Committee will vote on its opinion at the plenary session on 28 and 29 January 2021. 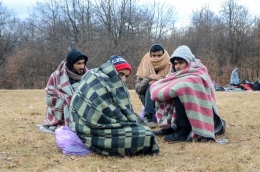