On 27 January, the EESC held a debate with Commissioner Johansson just before adopting its opinion on A New Pact on Migration and Asylum. In the opinion, the Committee expresses its reservations about the Pact's ability to help develop a common European framework for migration management that would be both effective and in line with the EU's values.

Opening the debate, the EESC President Christa Schweng said I am very glad that the Commission has presented the long-awaited pact on migration and asylum even under these very difficult circumstances. There is no excuse for not having a common and workable approach to migration issues and there is absolutely no time to waste. The New Pact is the chance for the EU to move forward and create a sound common basis for acting on migration and asylum issues.

In her opening remarks, Ms Johansson said The EU has suffered for too long from a poisonous debate on migration. Now it is time to sober up and to find pragmatic solutions.

The Commissioner singled out irregular migration as the most pressing challenge today, as this was not being sufficiently well managed. In the Commission's view, the root causes of irregular migration must be addressed and cooperation with third countries stepped up. It is also paramount to manage returns more efficiently, as only around one third of return decisions are actually carried out. Functioning solidarity between Member States is of huge importance.

Ms Johansson also stressed the need to invest in legal pathways, both for refugees through resettlement schemes and for labour migrants, as well as the need to give legal migrants a chance to integrate into the EU society.

Although welcome, the new Pact did not meet with the EESC's approval.

The Committee's main criticism was that the pact focused primarily on returns and the management of borders, at the expense of dealing with other burning issues, such as regular immigration channels, safe pathways for asylum and the integration of migrants. Also, according to the EESC, some of the proposed solutions may not be feasible in practice.

The rapporteur for the opinion, José Antonio Moreno Diaz, spoke at the plenary session and said We had great hopes for this pact but I have to say we are a bit disappointed. The Commission's analysis is good, we agree with the conclusions, but we are frustrated with the devil in the detail, with the proposals.

The opinion's co-rapporteur, Cristian Pîrvulescu, regretted the lack of progress on some of the issues dealt with in the pact. We are sad to say that there has not been a lot of headway made, but a lot of backtracking. We would encourage the Commission to take a bolder approach to some of these issues. It is very important to have the courage to call a spade a spade, he said.

According to the EESC, the pact's main faults lie in the content of its proposals. These include the Asylum and Migration Management Regulation, which provides for a new solidarity mechanism and new legislation to establish a screening procedure at the external border. There is also the Asylum Procedures Regulation, which sets out a new border procedure, a new strategy on voluntary return and reintegration and the Recommendation on cooperation between Member States regarding rescue activities carried out by private entities.

The Pact details the new solidarity mechanism under which Member States would be able to participate in the relocation or sponsored return of persons in an irregular situation. However, the EESC is not convinced that this new voluntary and selective mechanism would indeed alleviate the burden for countries under most pressure. There are no incentives for countries to participate in the mechanism, despite the fact that some of them refused to do so in the previous relocation programme.

The EESC also considers the proposed pre-entry screening system and border procedures to be inadequate: it is not clear how feasible the five-day period for completing the screening would be in practice, especially for those countries with the greatest number of people arriving irregularly by sea.

Furthermore, the EESC regrets that the pact fails to mention the United Nations' Global Compact for Safe, Orderly and Regular Migration for international migration management.

Johansson: The reality is different from 2015

The Commissioner said she did not agree at all with criticism that the Commission was lacking in ambition. The reality today is very different from 2015, when we had a massive inflow of refugees and relocation was a big issue, she said. She explained that the vast majority of irregular newcomers today were not refugees. Therefore, swift decisions and returns were very important.

Citizens are asking us to make the distinction

The Commissioner added that efficient return procedures were important for two reasons. On the one hand, they send a strong message to human smugglers, who are telling migrants that once they put their feet on European territory, they can stay forever. We have to show that this is not true, she said.

On the other hand, border procedures and returns are linked to the protection of the right to apply for asylum and to the obligation to give international protection to those who need it.

It is important to defend their right to come here and to apply for asylum and to guarantee them a proper and fair process, she said. After that process, if the decision is negative, then they are not eligible for international protection, and they need to go back to their country. This is what European citizens are asking of us. To make this distinction. Those who are eligible to stay are welcome and we would like them to be part of our society.

The situation in Bosnia

During the debate, EESC members expressed their grave concern over the situation at the EU border with Bosnia and Herzegovina, where 2 500 migrants remain without basic shelter and are struggling to survive hunger, thirst and winter, despite the fact that the EU had financed the camp Bira, which is fully winter-proof. The local authorities, however, are refusing to open it.

I am aware that the EU will provide an additional EUR 3.5 million on top of the EUR 88 million already provided to Bosnia and Herzegovina over the last three years to help vulnerable refugees and migrants, the EESC president Christa Schweng said. But we cannot continue reacting through financial incentives only. We need to implement long-lasting solutions based on solidarity. We also need safe migration routes and better living conditions in the countries of origin, which can be achieved through the development of political, economic and social policies.

On 23 September 2020, the European Commission presented a working agenda called A New Pact on Migration and Asylum. At a high-level conference hosted in November 2020 by the European Economic and Social Committee, representatives of civil society, think tanks and the European Parliament called the Pact "a missed opportunity for a much-needed fresh start". On 27 January 2021, the EESC's plenary assembly adopted its first opinion on the Pact. 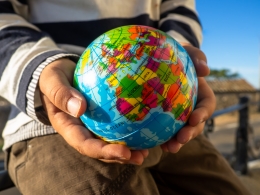 Presentation on the occasion of the webinar "New Pact on Migration and Asylum" organised by the EESC on 26 November 2020.