The Journey of the €uro

In the context of the 20th anniversary of the euro coin and in a cultural partnership with the ECO Section, a cultural initiative is being held partly physically and partly online to display the journey of the euro.

The exhibition consists of archive material provided by the Historical Archives of the European Union (HAEU), using parts of the previously organised online exhibition "From Conception to Launch: Twenty Years of the Euro".

Additionally, the exhibition is enriched by material from the "#EuroAt20" project, launched online in January by the European Commission (DG ECFIN – Unit for Interinstitutional relations and Communication), while the angle of Croatia joining the euro area on 1 January 2023 is also considered. The exhibition will be launched in connection with the ECO Section meeting, where the own-initiative opinion on the digital euro will be debated and agreed.

With the launch of the virtual video exhibition “Voices of Violence” by the Danish Cultural Institute, the European Economic and Social Committee (EESC) is providing a space where the frightening real-life stories of female survivors of violence can be told and heard, with listening and understanding being the first steps towards action and change. 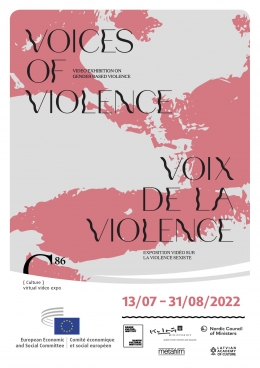 In this online exhibition, five emblematic artists have been selected by the French delegation to the European Economic and Social Committee, in recognition of their work in bringing these topics into the limelight and into public discourse. 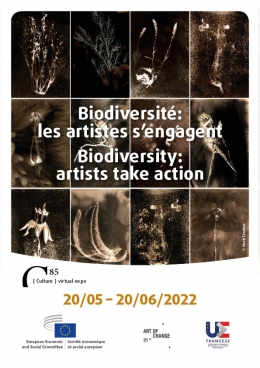 Cultural Event
This exhibition will be held 100% virtually.

The EESC is hosting an online photo exhibition entitled Heroes of Dark Times to highlight the situation of the political prisoners and increase awareness of the dangers of the authoritarian and oppressive system in Belarus. 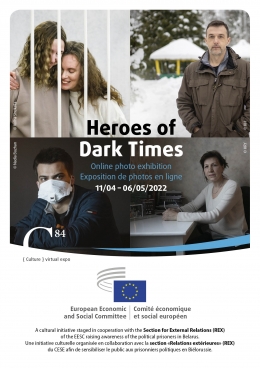 The EESC is hosting a photo exhibition entitled "Stay with us" to mark one year since the catastrophic earthquake that hit Croatia in December 2020. 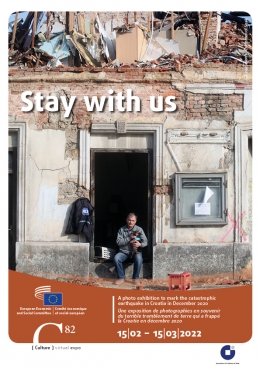 The EESC will host an artistic performance entitled "…because I'm a woman?" to mark International Women's Day, on 8 March 2022. A short 10-minute video by the talented young Polish artist Patrycja Alenkuć will feature a dance performance complemented by storytelling. 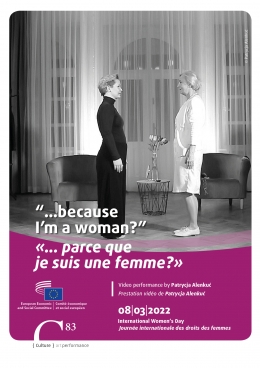 Frédéric Stucin is a professional photographer who lives and works in Paris and has been working with various French media since 2002.

The online exhibition will run from 15 January to 15 February 2022, in connection with the French Presidency of the Council of the EU. 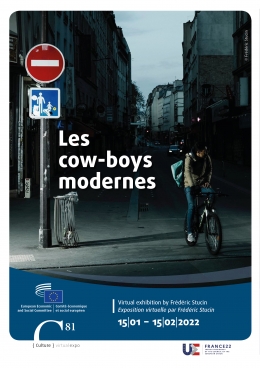 Digitalisation in the music sector: a lifeline during the pandemic
Cultural Event
This event will be staged 100% virtually

The cultural and creative sectors were one of the industries hit hardest by the COVID-19 pandemic. However, using digital tools, creativity and innovation, artists where able to stay in contact with their audiences, to share content and to bring concerts into living-rooms. New forms of content have emerged, some of them showing the artist recording in their own home and creating a more personal relationship compared with the previous stage-audience separation. Digitalisation has also brought music to people who would otherwise not necessarily have attended a venue, e.g. a classical concert to marginalised or vulnerable groups.

Moving towards a new, strengthened system of industrial relations resulting from the emergency COVID-19 measures

- - CANCELLED - -
The EESC will host the presentation of a study entitled "Moving towards a new, strengthened system of industrial relations resulting from the emergency COVID-19 measures" on Thursday 9 December, in the JDE building, meeting room JDE62.

The study, published in October 2021, will be presented by its authors at a meeting which is expected to take the form of an open debate between a panel of speakers, who will make statements on the topic, and the audience. 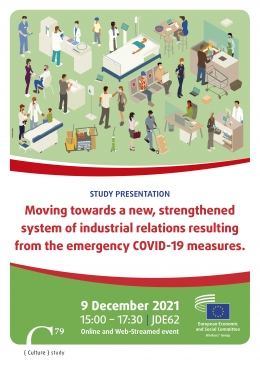 To mark the 2021 European Year of Rail, the EESC is organising a screening of a short film by the Europalia Arts Festival.

The short film will be an excerpt from the dance performance La Ronde by the famous French choreographer Boris Charmatz. Charmatz performed live for six hours in the hall of Brussels North train station on 15 October, in a show that was part of the Europalia Trains and Tracks programme for 2021. A six-hour series of events with dancing, singing and talking duets, visualising and symbolising a collective moment in a public space. 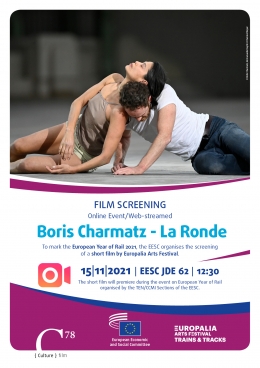