The agro-food supply chain connects important and diverse sectors of the European economy that are essential for economic, social and environmental welfare as well as for the health of European citizens. Over recent years, there has been a shift in bargaining power in the supply chain, mostly to the advantage of the retail sector and to the detriment of primary producers. The position of the most vulnerable actors, such as farmers, should therefore be addressed, in particular by ensuring that prices that allow the farmer to make a fair profit are paid throughout the agro-food supply chain and by putting an end to unfair trading practices.

Do we need an energy chapter in the TTIP?

In view of the ongoing TTIP negotiations, the EESC is organising a seminar, whose main purpose will be to be to assess the need for an energy chapter in the TTIP, in particular after the lifting of the US restrictions on crude oil exports and the impact that such a chapter might have on trade of energy goods and services, and on environmental and energy policies both in the EU and the US. Main topics: a) the impact of TTIP on the EU energy market and security of energy supplies; b) the possibility to foster a more transparent, predictable, open and non-discriminatory framework for traders and investors in energy and raw materials, by improving transparency and competition in the energy sector; c) an energy chapter in TTIP as a model to shape energy relations with other countries; d) the impact on trade in environmental goods, renewable energy and energy efficiency, aiming at contributing to the achievement of SDGs and climate change targets. 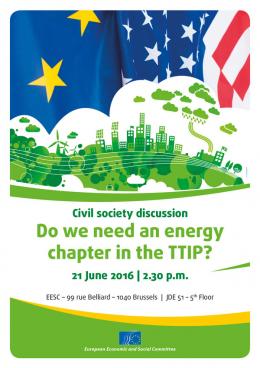 A Hope for Europe!

How can culture and cities help build hope and a new narrative for Europe? What value should we attribute to Culture? How does Culture drive economic growth? How should Europe trace the line between the past and the present, in order to ensure a sustainable, democratic and inclusive future? How can cities transform cultural diversity into social innovation, cohesion and trust?

These are some of the questions which were explored at the high-level conference organised by the Various Interests Group of the European Economic and Social Committee (EESC) in Brussels, on 20 and 21 June 2016. 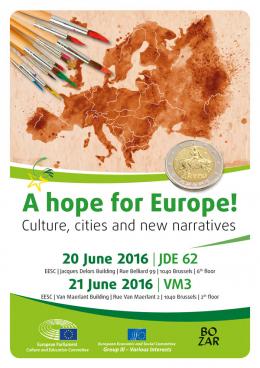 Driving Innovation and Industry in Europe

The employers' Group believes that a paradigm shift in the form of the digital transformation is sweeping across Europe and that it will affect industry, business and citizens alike. The EESC Employers' Group, in close cooperation with the Cambridge Network, has agreed to hold a seminar in Cambridge to exchange views on Innovation and Industry, and on the merits of business, industry and academia working together in Europe to prepare for the new post-industrial society. Cambridge was chosen as the venue for this event because of the overwhelming presence of high standard research and education; Cambridge is thus a real European – even global centre of excellence. 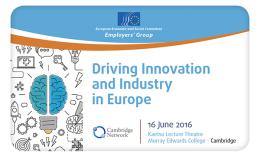 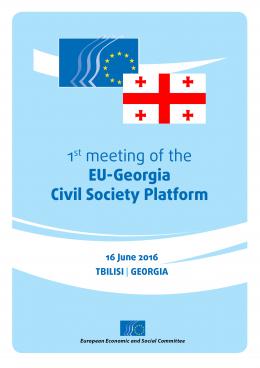 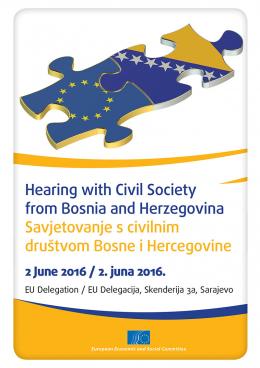 Screening of the movie "Demain"

On 2 June 2016 the SDO will hold its meeting in Brussels. This date falls during the European Sustainable Development Week and as a partner of that week, the SDO organises the screening of the movie "Demain" in the context of its meeting. 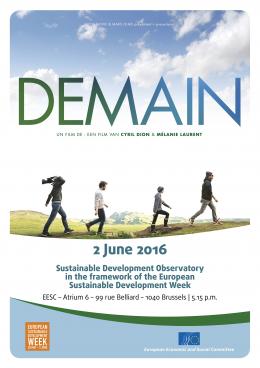