The EESC Consumers and Environment Category has made significant contributions to the protection of consumer rights and the environment in Europe. It has championed topics such as the regulation of consumer over-indebtedness, planned obsolescence and the circular economy. Fair and just climate mitigation and adaptation must take centre stage of the Category's activities in the future as consumers and citizens will be key actors in the green transition. The new EU Social Climate Fund to tackle energy poverty and joining forces of all actors are key for achieving a sustainable, resilient and fairer Europe. These are some of the main messages of the conference '30 years defending European consumers', held by the Category to mark its 30th anniversary and in the context of the Conference on the Future of Europe. The event on 1 October saw topical debates and the participation of high-profile speakers.

Opening the conference, EESC Diversity Europe Group president Séamus Boland highlighted the progress that has been made in consumer protection over the last three decades and reinforced that consumer interests and environmental protection must be defended in every village, rural area and small urban town. In this context, Mr Boland complemented the Category's work: The Category has contributed to securing common EU legislation to regulate consumer over-indebtedness. We should be proud that it has focused on the sharing economy, collaborative consumption and the fight against planned obsolescence, embracing a more holistic perspective of the circular economy. The Group president also stressed the key role played by consumers and civil society actors in delivering a sustainable, resilient and fairer world.

The first panel of the hybrid event explored economic aspects and the role of the various European institutions in achieving the radical rethinking of consumption, essential to mitigate climate change.

With regard to household consumption in Europe, François Letondu from Société Générale observed: There are major changes in typologies and purchasing methods, but profound differences between consumers.

Marie-Paule Benassi from the European Commission recalled the Commission's various initiatives to strengthen consumer rights of the last 50 years and explained that the New Consumer Agenda will set its ambitions for the next level of markets: more digital and green.

MEP Pascal Durand praised the Consumer and Environment Category's work, especially with regard to planned obsolescence, and explained that the European Parliament has been able to increase its impact by achieving a broad cross-party consensus on protecting consumers and the environment. We will keep working to support new EU-level powers and policies so as to respond better to consumer needs.

New challenges for consumers and the environment were the topic of the second panel. Participants discussed social aspects, digital and climate challenges and possible forms of consumption after COVID-19.

Jean-Daniel Lévy from Harris Interactive analysed the development of consumption in Europe. Over the past 30 years, Europeans have become more and more environment-conscious and have been getting into the habit of doing things online, though without that undermining physical purchasing.

Monique Goyens from the European Consumer Organisation (BEUC) said: The EESC’s longstanding mission to promote consumers becomes even more crucial in current times with global and digitalised markets". Concerning the green transition, Ms Goyens added: "The EU will succeed to address these challenges only if people, in particular the most vulnerable ones, are centre to its policies.

The two spokespersons of the Consumers and Environment Category concluded the debates and gave an outlook on the future work of the Category.

Thierry Libaert said: Environmental protection and consumer protection are closely entwined. Our action to combat planned obsolescence will reduce flows of waste and raw materials, while making repairable and sustainable products available to consumers. It is important to always make the connection between consumer issues and the environment.

Bernardo Hernández Bataller added: In the future, the category will not only concentrate its work on the promotion of the circular economy, but also on climate change, doing everything possible so that the advertising messages are truthful, and the marketing techniques are not misleading. He also called for a policy that pursued a high level of protection for consumers and the environment, arguing that consumers increasingly focused on the sustainability of goods and products.

The Category's Members have drawn up a large number of opinions covering every key issue relevant to consumption and the environment. However, Members are proudest of having championed innovative ideas in opinions that won broad support and were followed up on by the European institutions. Difficult as it may be to pick out the best opinions, the brochure on the occasion of the Category's anniversary gives a taste of those Category Members have deemed to be the most meaningful: https://www.eesc.europa.eu/en/our-work/publications-other-work/publications/30-years-defending-european-consumers

More information on the Category is available at: https://www.eesc.europa.eu/en/members-groups/categories/consumers-and-environment-category-cec 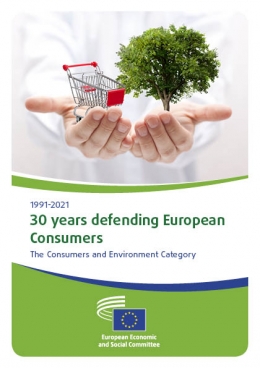