‘No one should be left behind’: that is the European Commission’s official message concerning its Green Deal and EU Recovery Programme. What does this mean in terms of representing the social interests of Europe’s workers?

Norbert Kluge is the scientific founding director of the Institute for Co-Determination and Corporate Governance at the Hans Böckler Foundation.

For many people, the current European Commission’s commitment to the European Pillar of Social Rights, underpinning the European construction, has struck a chord like no other Commission for a very long time.

The latest survey results from the Eurobarometer make this clear: nine out of ten respondents consider a Social Europe to be personally important to them. But there is work to be done in many areas: inequality of opportunity in relation to jobs and income was criticised, as was the issue of access to good health care. More than two-thirds (71 per cent) regard a lack of social rights as a serious problem for the EU. On the other hand, 62 per cent of respondents believe in a more social Europe by 2030. They expect their politicians to make it happen.

But workers do not want to wait for the promised social improvements for all until the achievement of a climate-neutral Europe by 2050. They want, together with their trade unions, to get ahead of the game and make the transformation and restructuring of our industries the platform for the Just Transition – thereby ensuring compliance with the demands of the Paris Climate Agreement also in the social domain.

At the end of March the EU Social Commissioner Nicolas Schmit presented the action plan for implementing the EU Pillar of Social Rights. Is this a major step in the right direction?

The European Commission has shown that it is serious. It has set out a ‘social framework’ for Europe in 20 guiding principles. Europe’s trade unions have welcomed the action plan, even though they regard it as only a modest step forward.

The EU’s legislative proposal for a European minimum income is currently attracting a lot of attention. Even the administrative benefits of, for example a level playing field for wages – and thus also equal cost expectations for companies – have not deterred particularly German employers from expressing their adamant opposition: no European interference in social matters. With such an antiquated approach, however, we will never be able to tackle such cross-border challenges as climate neutrality and crisis management in the wake of the pandemic. We need to support Denis Radtke (EPP) and Agnes Jongerius (S&D) in their efforts to achieve a broad consensus on their report in the European Parliament in autumn. But the debate is under way. And the citizens of Europe can get a clear idea of who is striving for a more social Europe and who is doing their utmost to obstruct it.

What about codetermination? Will the EU Social Summit in Porto send a signal encouraging enhanced social dialogue as a formative principle of the social market economy?

The current Council presidency under Portugal is having a revitalising effect on social Europe. ‘More democracy in the world of work’ (ETUC) is being actively pursued. Social dialogue is being propagated as a general implementation tool. This also includes European minimum standards as regards codetermination.

European policymakers have recognised that it is not only a matter of objectives. What really counts is their implementation in the form of a more social Europe. If they fail in this the goal of a ‘Just Transition’ will also fail. Climate change and the fundamental transformation of employment and the economy are unlikely to give us a second chance. 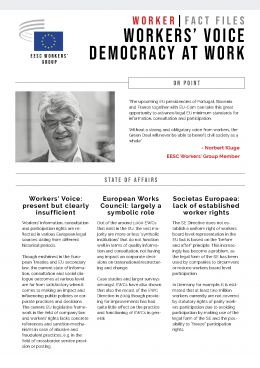 We generally welcome the Fit for 55 package of the European Commission, as the effort it constitutes to face many pressing environmental issues. Without decisive action to curb emissions we will be facing drastic ecological disturbances: extreme weather conditions, droughts, floods, drastic food and water shortages, and eventually a catastrophic rise in the sea levels resulting in the need to resettle the vast majority of human population, which inhabits coastlands around the globe.