We generally welcome the Fit for 55 package of the European Commission, as the effort it constitutes to face many pressing environmental issues. Without decisive action to curb emissions we will be facing drastic ecological disturbances: extreme weather conditions, droughts, floods, drastic food and water shortages, and eventually a catastrophic rise in the sea levels resulting in the need to resettle the vast majority of human population, which inhabits coastlands around the globe. Europe must be a leading force in this effort, and the package certainly contains some of the needed ingredients for it: reaching 40% of our energy from renewable sources, continuing to curb emissions, shifting taxation to end the subsidies to fossil fuels, promoting energy efficiency, reviewing the role of agriculture and forestry in the effort, as well as lowering the cap for ETS allowances and ending the free ones for aviation.

Likewise, the acknowledgement of the need for a socially fair transition is also a positive step. Sadly enough, it remains insufficient in the text, despite the high support of our citizens for a more social Europe. Workers’ Group President Oliver Röpke commented that ‘we will not manage the transition of tomorrow without providing reliable and secure prospects for the workers in the different industrial sectors today. Unfortunately, the need for a strong and mandatory Workers´ Voice is not sufficiently addressed in the proposal. The question of a just transition requires for social, environmental, and economic sustainability to be put on equal level. This notwithstanding the reality of the fact that without decisive environmental action, we will face a social collapse of untold consequences. Yet without social justice, those measures will not happen. Recent in memory are still the ‘gilets jaunes’ of France, but similar issues can arise everywhere, particularly with the current situation of the pandemic, and derail the climate fight.´

In particular, there are worries that the inclusion of fuel for heating and vehicles in the ETS could lead to a large rise in prices, which doubtlessly will be passed to the final consumer, as we are seeing these days with electricity. With 8% of the EU population unable to keep their houses warm in winter already (and as high as 36% in Bulgaria), and with a combustion engine car as the only means for transportation for many, the impact of this rise could have dramatic effects on the living conditions of the population. In general, the package must be wary of the tendency to burden common citizens with the brunt of the change, and ensure that the changes in taxation provide a progressive and fair source of resources. This is also true for the case mentioned on fuel for cars or heating, where taxes already constitute a hefty share of the final price for citizens.

As noted at the beginning, climate change is evidently a global problem, one in which Europe can lead, but cannot solve alone. The proposal for a Carbon Border Adjustment Mechanism is therefore key and must be designed in an effective way. The pandemic has shown clearly the costs of deindustrialisation, and without a system to balance the efforts done in curbing emissions, the problem will only increase. The mechanism should therefore be sufficient to counteract the initial higher costs of sustainability, and drive pollution down globally, rather than industry out of Europe. The Workers´ Group will continue to stand up for the interests of employees, especially in sectors that are particularly affected by structural changes.

We also believe too much is left for member states to decide: ‘giving the member states the option to create cost-effective manners of tackling climate change’ is as often jargon for ‘less environmental regulation on energy’ as invoking subsidiarity is to thwart EU attempts at protecting human rights, working conditions, or the Rule of Law. The Just Transition requires strong mechanisms to ensure the most unsustainable working positions are not simply turn into unemployment, with entire regions facing poverty and exodus. Anticipating and managing the impact of the transition to a carbon-neutral economy is key. We stress the need for an active and permanent social dialogue as a pre-condition for the anticipatory management of change. Information, consultation and negotiations are considered the basic tools of social dialogue at European, national and local level.

The different legislative proposals of the package contain a positive impetus to the necessary fight against climate change, and now we must make sure, both in the Parliament and in the Council (discussing with our governments in each member state) that social protection and wealth redistribution are underlined so that social and environmental sustainability enjoy equal footing, and that the Council does not water down the goals.

Oliver Röpke commented that ‘involvement of citizens and social partners will be key to ensure the just transition is truly fair and socially, economically, and environmentally sustainable, for only then it can succeed. The fair transition has a massive potential for sustainable economic growth, with quality jobs and decent living wages; if done correctly, we will not be just tackling climate change, but also the social crisis we face’. 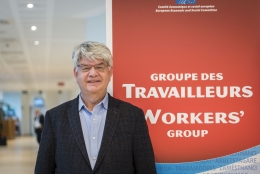 No Green Deal without a Social Deal

In its own-initiative opinion, the EESC examines the extent to which existing EU company law currently serves as an "expedient" for the politically-desirable Green Deal and which gaps still need to be closed, in particular regarding corporate social responsibility obligations. The opinion aims at following-up on the European Commission's initiative on due diligence and broadening the debate on sustainable corporate governance interlinking the social, environmental and economic dimensions.

EESC opinion: No Green Deal without a Social Deal