The European Economic and Social Committee (EESC) throws its support behind the 2020 Commission work programme, underlining that civil society can make a valuable contribution to placing sustainable development at the core of people's personal and shared responsibility.

The EESC will support the Commission's drive to match aspirations with actions in order to achieve climate neutrality by 2050 and to put sustainability at the heart of our individual and collective responsibility. At the plenary session held in Brussels on 20 February 2020, EESC president Luca Jahier backed this year's European Commission work programme and its focus on sustainable development for a greener Europe.

Speaking at a debate with Maroš Šefčovič, the European Commission's vice-president for Interinstitutional Relations and Foresight, Mr Jahier pointed out that the EESC welcomed the driving force behind the first Commission work programme, leading the transition to a fair, climate‑neutral and digital Europe. We fully support the European Green Deal as a key driver for change and therefore the EESC would be willing to set up a permanent dialogue on sustainable development, he declared.

The EESC has repeatedly called for an ambitious and coherent strategy to achieve the 2030 Sustainable Development Agenda, most recently in its contribution to the 2020 European Commission work programme and beyond, adopted in October 2019, where it stressed that an overarching EU 2050 strategy for sustainability was needed in order to implement the UN Agenda 2030.

In this respect, the EESC president said: We are convinced that the EU has to lead the way at global level and that the EU has to promote this agenda across the world. This is why we insist so much on the fact that the EU trade policy must absolutely be consistent with the 2030 Agenda: the existing provisions on trade and sustainable development chapter agreements must be effectively enforced.

Presenting the Commission work programme, Mr Šefčovič underlined that the main priorities corresponded to those identified by the Committee, namely the twin digital and climate transitions, the challenges of demographic change, and the need to ensure that our businesses and industry can continue to innovate and compete in a more challenging global environment.

The 2020 work programme will not only form the basis of our work for the first year of the mandate, but will also set its vision, direction and pace for the next 5 years and beyond, he highlighted. It is an ambitious programme, with 43 policy objectives or packages. Of these, 28 legislative initiatives will be brought forward early in the mandate so as to allow plenty of time for their adoption and implementation, he added.

Mr Šefčovič also stressed that the support of civil society was crucial for the success of the Commission work programme. Now that a new legislative cycle had started it was the perfect time to request its input and views on these important projects.

Mentioning the existing cooperation in such fields as the Circular Economy Stakeholder Platform and the European Migration Forum, he indicated that the Commission, beyond listening to the EESC, could also take advantage of the Committee's networks and expertise in participatory dialogue and organise joint events.

Mr Jahier was pleased to note that the four "megatrends" put forward by the EESC in its October resolution were also addressed by the 2020 Commission work programme, namely digitalisation, climate change and biodiversity loss, demography and globalisation.

In the past few years, the EESC has focused its work on the same priorities as those set by the current Commission work programme: this coherence is a promising foundation for our future cooperation on foresight, upgrading the EESC's well-established contribution to the Better Regulation Agenda. Our aim is to further enhance the involvement of organised civil society in the EU's policy‑shaping and decision-making process, by contributing to all stages of the policy cycle, he concluded.

During the debate, Jacek Krawczyk, president of the EESC Employers Group, made it clear that the main future priority was to reconnect the EU to citizens, showing the value that the EU had on their daily lives.

Oliver Röpke, president of the EESC Workers Group, referred to the need to turn the Social Pillar into a reality, including the guarantee for a fair minimum wage and making sure that Better Regulation did not damage consumers and workers' rights.

Finally, Krzysztof Pater, on behalf of the EESC Diversity Europe Group, focused on citizens' involvement, stressing that the EU should recognise the real economic value of volunteering activities.

For more information on the EESC contribution to the 2020 European Commission work programme and beyond, please consult our website. 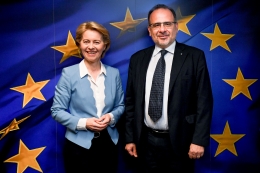 The European Economic and Social Committee's contribution to the 2020 Commission's work programme and beyond
Document type:
Resolution
Latest update:

The EESC adopted its contribution to the 2020 European Commission work programme and beyond on 30 October 2019. Sustainable development must be at the heart of the future of Europe. The EESC calls for an overarching EU 2050 strategy to implement the 2030 Agenda.