In its opinion adopted at its June 2021 plenary session, the EESC welcomes the European Commission's Communication on The European economic and financial system: fostering openness, strength and resilience. As the post-pandemic transformation is causing a significant shift in the global balance of economic power, the EU should act swiftly to increase Europe's economic resilience. In particular, the EESC agrees with the need to strengthen the international role of the euro as a key tool for enhancing Europe's global position.

Tomasz Wróblewski (Group I, Employers) is the rapporteur for the EESC opinion. He thinks that the Commission should focus more on the reasons for the euro's weakening international role. The global position of the euro is weakening, but not as rapidly as that of the dollar, he said. This does not change the fact that the position of the euro is affected by different things. Firstly, the lack of an integrated, common market for financial services. Without the completion of the Banking Union and of the Capital Markets Union it will be hard for us to compete with the dollar. He added: By unifying the market and expanding the range of services, the euro would become a more attractive tool for global investments. This would also be true for European companies concluding international contracts.

The EESC recommends giving more attention to the rapidly growing economy of China and calls for an action plan that takes this into account. China's average real annual GDP growth rate over the past 30 years has been around 10%, compared with around 2% in the EU. The pandemic is likely to bring further differences in GDP growth rates: 4.4% in the EU (-6.1% in 2020) and 8.4% in China (2.3% in 2020). The role of the Chinese renminbi is also growing in international trade and clearing. China is also working intensively on its digital currency, leaving most of the world behind. The EU must respond quickly and thus the EESC supports the proposal to create a digital euro. In this domain, points out Mr Wróblewski, Europe may have more attractive solutions, given our commitment to the protection of personal data and user privacy.

When it comes to ambitious objectives, Mr Wróblewski says that The first thing we need to remember is that the single currency can only be as strong as our economy. Therefore, he continued, we must consider EU labour and corporate regulations from the point of view of competitiveness and allow a flexible response to global innovations. It is also worth using the existing advantages to strengthen the role of the euro in the world. One of our proposals is to create a global market for green bonds denominated in euro.

Impact of regulations and economic governance

More broadly, greater emphasis should be put on reviewing EU regulations in terms of their impact on the competitiveness of European companies. The role of universities and research institutions in supporting innovation and research and development should become more strategic and given proper recognition. Moreover, the EESC proposes introducing measures to help complete structural changes at both EU and national level, such as revising the economic governance framework in order to make it more prosperity-oriented and investment-friendly.

The EESC agrees with the Commission that developing financial market infrastructures will prevent reliance on the provision of critical services from third-country jurisdictions: the EU should find ways to tackle its growing dependence on non-EU financial and extra-financial data providers. The new digital euro-based settlement system could be used to support trade with partners on whom third countries have imposed unilateral sanctions; its use by sanctioned countries and persons could also be blocked.

Strengthening the implementation and enforcement of EU sanctions

In order to increase the effectiveness of EU sanctions, they need to be implemented and enforced in a uniform manner. Subsidiaries of non-EU companies benefit from legal loopholes to circumvent bans, leading to distortions in the single market: against this background, the EESC welcomes the Commission's proposals aimed at strengthening the EU's ability to apply sanctions uniformly and to speak with one voice. Finally, the EESC supports the development of tools to counteract the effects on EU economic operators of the unlawful, extra-territorial application of unilateral measures by a third country.

On 19 January 2021, the  European Commission presented its Communication on The European economic and financial system: fostering openness, strength and resilience, aimed at better enabling Europe to play a leading role in the global economic and financial system, while protecting the EU from unfair and abusive practices by third countries and companies based in them. The content of this communication is the subject of an EESC opinion, and was analysed at an EESC public hearing in April 2021. 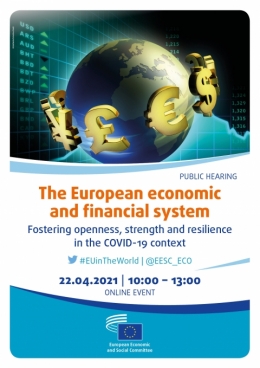