Halting this wave is fundamental, as history shows clearly where it ends. The very promise of the European Union, created from the ashes that resulted from the first attempt of fascism, is enshrined in Article 2 of the Treaty of Fundamental Rights: "human dignity, freedom, democracy, equality […], in a society in which pluralism, non-discrimination, tolerance, justice, solidarity and equality between women and men prevail".

But to and stop fascism, we must understand where it comes from, from where it feeds.

It mixes nationalistic and social stances, using people's discontent with inequality and poverty, their desire for security, and promise simple measures to protect them. Sold as a new recipe. However, back in 1920s Italy:

"Benito Mussolini and his National Fascist Party (PNF) stepped into the breach, taking advantage of the failure or ineffectiveness of existing institutions, parties, and elites, and offering a mixture of “national” and “social” policies. Fascists promised to foster national unity, prioritize the interests of the nation above those of any particular group, and promote Italy’s stature internationally. The fascists also appealed to Italians’ desire for social security, solidarity, and protection from capitalist crises. They promised therefore to restore order, protect private property, and promote prosperity but also to shield society from economic downturns and disruption. Fascists stressed that wealth entailed responsibilities as well as privileges, and should be administered for the benefits of the nation." (Source)

"Then the Great Depression hit, causing immense suffering in Germany. The response of the government, and other political actors, however, must also be remembered. For different reasons, both the era’s conservative governments and their socialist opponents primarily favored austerity as a response to the crisis. Thus came a golden opportunity for fascism.

Hitler’s National Socialist German Workers’ Party (NSDAP) promised to serve the entire German people, but the German fascist vision of “the people” did not include Jews and other “undesirables.” They promised to create a “people’s community” (Volksgemeinschaft) that would overcome the country’s divisions. The fascists also pledged to fight the Depression and contrasted its activism on behalf of the people’s welfare with the meekness and austerity of the government and the socialists. By the 1932 elections, these appeals to protect the German people helped the Nazis become the largest political party, and the one with the broadest socioeconomic base." (Source)

Meanwhile, optimistic neoliberal positions wonder could this happen, if the world is richer than ever, and more and more people have been dragged from poverty. While the statistics might be true, they largely overlook that working classes in developed countries have seen none of this improvement, and that redistribution mechanisms in these countries have been severely diminished by decades of neoliberal policies. The picture below displays the real income growth of the world population, and where it has (roughly) ended up. The picture is even more complex for countries like Brazil, where social inequality goes beyond the point of ensuring any kind of ‘social peace’. 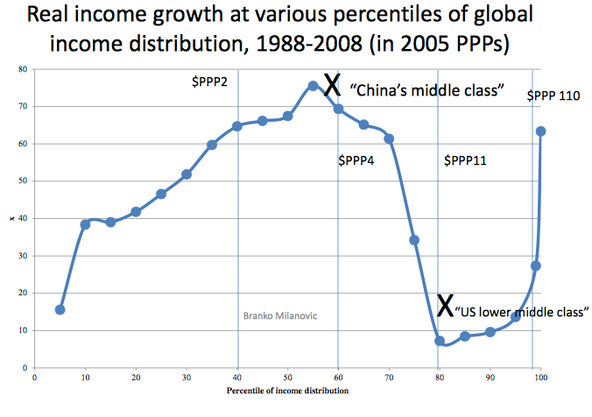 The process, while shocking, is not unexpected. Back in 2015, Paul Krugman explained how this poverty and inequality, together with austerity policies, was setting the grounds for a fascist rise all over the world.

If social claims appeal to the people's struggle with poverty and inequality, nationalism offers an encompassing narrative, an identity that blurs the lines of social classes and hides the social fractures that created this very problem. While Fascism promises to protect workers, studies show how Workers' conditions worsened severely during fascist times, something that can also be seen in the strong ultraliberal component most of the 'new far right', and of the dubious democratic credentials of of neoliberalism, devoid of the philosophical background of political liberalism. Nationalism gives the two great enemies behind the woes of people: Europe, and immigrants. The external enemy, the internal enemy. Both combined ensure that no one is paying attention at inequality or working and living conditions.

In fact, Bolsonaro plans to appoint a Chicago School of Economics Banker as economy minister (much alike Pinochet was accompanied in Chile by neoliberal economists from the same faculty), something that is already improving the mood in Wall Street.

The answer, while far from easy, is clear: tackling the roots means fighting inequality and poverty, ensuring that no one is left behind, and the ones feeling left behind have someone speaking for them. Together with this, nationalism can only be countered with common, European policies of inclusion, solidarity, equality. We need, walking on these two legs, a new economic model for the European Union, based upon the Treaty of Fundamental Rights and the Pillar of Social Rights. A social Europe where tolerance replaces xenophobia, and where social dialogue and economic redistribution ensures the living and working conditions of everyone.

Find more about our work on:

The European Pillar of Social Rights