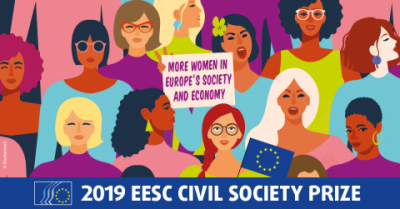 Applications for 2019 are now open

The European Economic and Social Committee (EESC) has launched its Civil Society Prize for 2019. This year's theme is More women in Europe's society and economy, and the prize will honour innovative initiatives and projects which aim to fight for equal opportunities for women and men and their equal treatment in all spheres of economic and social life.

The EESC Civil Society Prize is open to all civil society organisations officially registered within the European Union and acting at local, regional, national or European level. Individuals can also apply. To be eligible, initiatives or projects must have already been implemented or be still ongoing.

MORE ABOUT THE THEME OF THIS YEAR'S PRIZE

The EESC – which gives a voice to Europe's trade unions, NGOs and employers' organisations at the EU level – has repeatedly warned of persistent gender segregation and discrimination in European labour markets and society. Sixty years after the EU committed to the goal of eliminating the gender pay gap in the Rome Treaty, it is still looming large at around 16%, with a gender pension gap at a staggering 38%.

Women account for 51% of the EU population, yet only 67% of them work. Of all entrepreneurs, just 31% are women. Due to their care duties at home, they are more likely to take part-time or precarious jobs, ending up earning less. They are still massively under-represented in political and economic decision-making bodies, such as company boards.

Gender stereotypes permeate all spheres of life. The media often perpetuate gender roles, stereotypes or norms or even portray degrading images of women. Faced with the latest backlash on women's rights in Europe and with bleak estimates that it will take more than a century for women to be treated equally to men, the EESC has recently called for a political commitment to achieving equality between women and men in Europe.

The EESC will this year be awarding its Civil Society Prize to outstanding projects and initiatives covering at least one of the following issues:

The full description of requirements and the online application form are available on our webpage: http://www.eesc.europa.eu/civilsocietyprize/

ABOUT THE CIVIL SOCIETY PRIZE

The Civil Society Prize, now in its eleventh year, was launched by the EESC to reward and encourage initiatives and achievements by civil society organisations and/or individuals that have made a significant contribution to promoting the common values that bolster European cohesion and integration. In 2018, the prize focused on identities, European values and cultural heritage in Europe.

We kindly invite you to encourage civil society organisations in your country to apply for the EESC Civil Society Prize 2019 and thus help valuable projects win recognition.