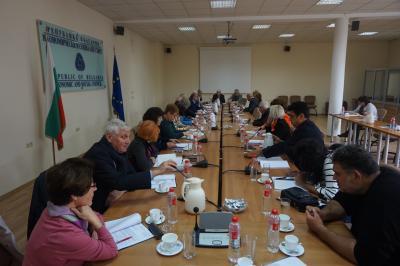 On 9 October the Plenary Session of the ESC adopted a Resolution on "A White Paper on the Future of Europe: Reflections and Scenarios for the EU27 by 2025"

In the context of public debates following the European Commission's White Paper and a series of reflection papers on the future of the European Union after Brexit, ESC has been actively involved in the EESC's debate on the subject this June in Sofia. At the same time, the future of Europe will be one of the important issues discussed during the upcoming Bulgarian Presidency of the EU Council in 2018 and our country must have a clear position in this process.

In this regard, through the adopted document, organised civil society in Bulgaria expressed its united position on the five scenarios outlined by the Commission for the direction of development of the EU by 2025. In the Resolution ESC considered the challenges facing the EU, and in particular Bulgaria, arising from globalization, technological change, demographic crisis, migratory pressure, terrorism, regional conflicts, protectionism, economic and social inequalities. According to ESC, they are related to the "lack of economic and social convergence, transparency and credibility in the decision-making process, as well as violation of the principles of subsidiarity and proportionality in the EU".

ESC noted that the outlined scenarios objectively reflect different sentiments in society - from maintaining the status quo or narrowing the scope of pan-European policies to changing priorities, individual or collective progress. This is why the Resolution stressed the need to address the crisis of citizens' legitimacy and the trust in the EU institutions primarily due to the "excessive empowerment of unselected elites and widespread lobbying." At the same time, according to the Council, none of the scenarios fully meets the expectations of Bulgarian citizens and could not be considered as baseline scenario.

Considering the positive and negative aspects of each of the five scenarios, ESC points out that, following widespread national and high-level debates in the EU, a variation based on a combination of the various elements that will contribute primarily to the prosperity of the European economy and the well-being and security of all citizens of the Union.

In the document ESC expressed its view that the main elements of the path for developing the EU must be based primarily on maintaining the unity of EU-27 and deepening further pan-European cooperation in the Single Market and the free movement of goods, services, capital and people, building on what has been achieved, and strengthening cohesion.

Another element of the future scenario should certainly be pan-European security institutions, which will create prerequisites for national governments to redirect funding to areas linked to raising living standards.

ESC stressed that it is particularly important for Bulgaria to preserve the convergence policy to accelerate the country's accession to the Eurozone, to strengthen the social dimension of the integration process and to join the European Social Rights Pillar.

According to ESC, there is a need for strict division of responsibilities at the EU-27 level, as well as at the national, regional and local levels. Therefore, ESC stated its support for the scenario "based on limiting excessive interference and detailed harmonization in order to better regulate, preserving the cohesion policy and the regional policy to overcome the differences in economic and social development and to integrate Bulgaria into a now-consolidated Eurozone".

ESC supported the need for a collective response to the global and internal challenges facing the EU: social and economic inequalities, regional conflicts, migratory pressure, terrorism, protectionism. At the same time, ESC welcomed the adopted EU leaders' Declaration on the 60th Anniversary of the Treaties of Rome, emphasizing the 27 Member States' determination to adopt a new agenda and the agreement of the Member States to work towards a safe and secure Europe; a prosperous and sustainable Europe; a social Europe; a Europe that stands strong on the world stage.

In the resolution, ESC outlined the expected challenges for reaching agreement on EU's development path and is convinced that European citizens expect a discussion of changes in the EU Treaty, even if real reform is not achieved.

In conclusion, ESC stated that it will monitor the development of the discussion at both the national and European level at the highest level and expresses its readiness to be actively involved in defining the direction of development of the Union in the context of the Bulgarian Presidency of the Council of the EU (1 January - 1 July 2018).