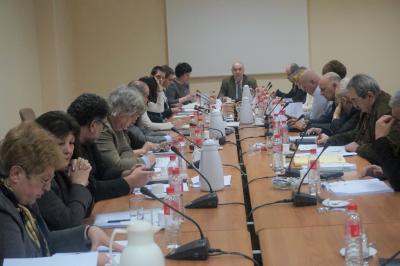 We are facing a revolution that will radically change the way we live, work and treat one another. This is stated in an opinion on "The Future of Labour: Challenges of the Fourth Industrial Revolution" adopted by the Economic and Social Council. With this document ESC draws the attention of the institutions to the new challenges related to the digital transformation of the economy, which will change the Bulgarian economy as well. ESC is of the opinion that there will be changes in the state government and institutions, education, health care, transport, etc. The fourth industrial revolution is both an opportunity and a threat to producers and workers, the opinion argues.

Therefore, ESC recommends to the government to develop as soon as possible a long-term strategy to meet these challenges and prepare our country for entry into the Fourth Industrial Revolution. According to ESC, this transition strategy must be a long-term and consistently implemented plan, regardless of the change of executive power. The changes that we expect are so fundamental, ESC's document says, that historically mankind has never been placed before such a great prospect of prosperity but at the same time of potential danger. The changes are unprecedented in magnitude, speed and scope, the statement says.

ESC highlights the major challenges we face - insufficient and inadequate qualification of employees, new areas and commercial practices that require regulation, the risk of disappearing jobs, without a plan what to do with the workers, etc. ESC allows the possibility that economic growth will not create enough new jobs. According to the document, the labour market will change and many professions will disappear or will be replaced by new ones. The opinion quotes an analysis by the World Economic Forum, according to which 65% of the children now starting school will work entirely new, non-existent professions. Referring to other analyses and reports of the European Commission, EESC opinions and Eurostat data, ESC warns that with the advent of new technologies there will be a process of increasing inequality in income, wealth, intellectual property, etc. The opinion therefore draws attention to the fact that the European approach to the Fourth Industrial Revolution is much more technological than social and stresses that the social aspect is of the utmost importance because it does not only impact technological but also social life, the distribution and redistribution of income.

At the same time, ESC also points to the benefits expected from the processes of the Fourth Industrial Revolution, such as the creation of quality new jobs, new sectors, products, services, new forms of integrated management, intelligent machine interface, and above all labour productivity. ESC stresses the conclusion that innovation will create new jobs and will significantly increase labour productivity. In this regard, ESC is of the opinion that the state must increasingly support innovation in the industrial sector. The education system also needs to adapt to the new requirements, especially for professional skills and quality of the workforce.

Having raised a number of issues related to the labour market and the future social model for development, ESC concludes that issues such as inequalities in all forms, tax and social security systems reforms as well as other regulatory environment problems should be emphasized in the context of the changes that our society expects.