TTIP, labour, migration and energy were the main topics discussed during the Extraordinary Bureau Meeting of the Employers' Group which took place on 6 and 7 June in The Hague. The Members of the Bureau had the opportunity to exchange views with representatives of the Social and Economic Council of the Netherlands (SER), VNO-NCW, The Hague Security Delta, The Hague Centre for Strategic Studies, Deltares, Airborne and CEEMET.

Meeting at the SER 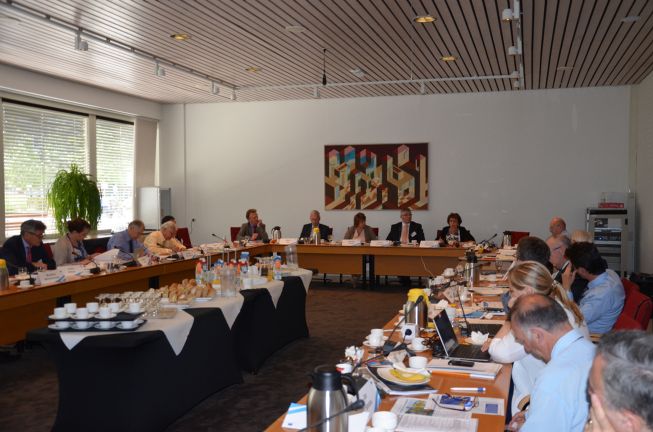 Mariëtte Hamer, President of the SER, explained that the SER has a specific consultative role in the Dutch governmental decision-making process. It is used by different social partners as a platform for consultation, advice and information. Recent major topics include TTIP, labour, migration and renewable energy/sustainable energy supply.

Véronique Timmerhuis, Secretary-General of the SER, mentioned that the SER is quite unique in the way it works. There are 17 parties in the Dutch parliament and, as a consequence, coalition governments area necessity. The SER acts as a house of dialogue and benefits from the support of the social partners. The SER is an independent body and is not directly involved in social dialogue.

An important point of discussion during the meeting was raising the age of retirement in The Netherlands. The current retirement age is 67, which is much higher than in the past. Participants also discussed the referendum policy in The Netherlands, the relationship of the SER with other Councils in the Member States, social dialogue and TTIP. 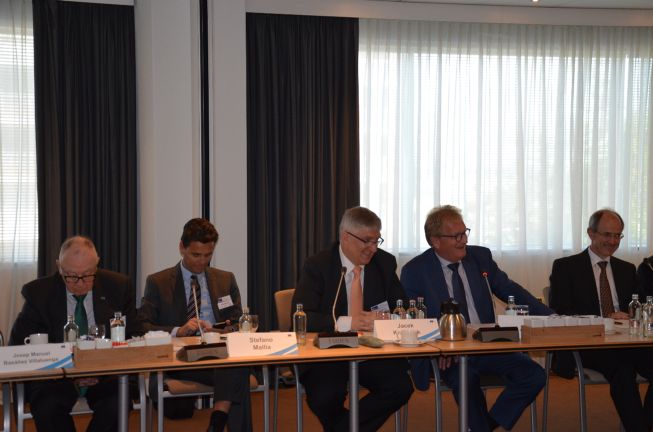 On 6 June, the members of the Employer's Group held a discussion with representatives of VNO-NCW (Confederation of Netherlands Industry and Employers). The debate focused on 2 main topics: the Dutch economy and the Energy Agreement.

The Dutch economy: still standing after the financial crisis.

The delegation was warmly welcomed by Hans de Boer, President of VNO-NCW. He stated that the Dutch economy is doing very well at the moment, despite the fact that it had also suffered from the financial crisis. During the World Economic Forum it had been said that The Netherlands is the fifth most competitive economy in the world. Mr de Boer explained that they also need to deal with the refugee crisis and find sound solutions in order to ensure that the internal market remained fair.

Anthony Stigter gave a presentation about recent developments in the Dutch economy from a business perspective. The economy had slowly recovered after the financial crisis, but with major sectoral shifts. All spending categories (e.g. exports, housing & business investment, household consumption) are once more contributing to GDP growth. Private investments are above the multi-annual average and there is a greater redistribution of government expenditure and less public investment. In order to maintain this positive trend, we need a new strategy from both a political and economic perspective. 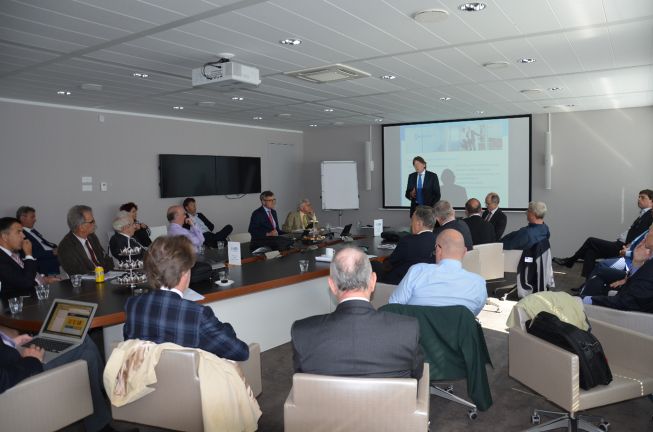 Frits de Groot presented the Energy Agreement which was set up for The Netherlands for the period 2013-2020. Business, industry, government and NGO's are all major partners in this agreement and they have committed themselves to the following package deal to improve the EU ETS for the post 2020 period: tightening the reduction path for the ETS cap aimed at achieving the long-term goal of an 80 to 95% reduction in greenhouse gases for the whole economy by 2050, securing the position of internationally competitive companies (‘carbon leakage companies’) through a 100% free allocation of rights based on realistic benchmarks and actual production, based on the best performance in the sector and compensation for indirect (electricity) costs, based on the best performance in the sector. This package of solutions has the potential to solve both the problem of volatile carbon prices and that of the lack of protection against carbon leakage.

In the afternoon the members visited the The Hague Security Delta. The HSD Campus is the national innovation centre of the Dutch security cluster. All the big players in cyber-security are present on this campus. The three main partners are the Government, Business and Innovators/Knowledge Institutions (triple helix), as explained by Rob de Wijk, founder of the The Hague Centre for Strategic Studies (HCSS) which also has an office at HSD. At the HSD Campus, the latest developments in the field of security are demonstrated, and wide-ranging information about the security cluster can be obtained. Erik Frinking, Director for Strategic Futures of the The Hague Centre for Strategic Studies (HCSS), gave a presentation on Cyberspace Norm Development and Max Remerie, Programme Manager at HSD, presented the National Cyber Testbed. 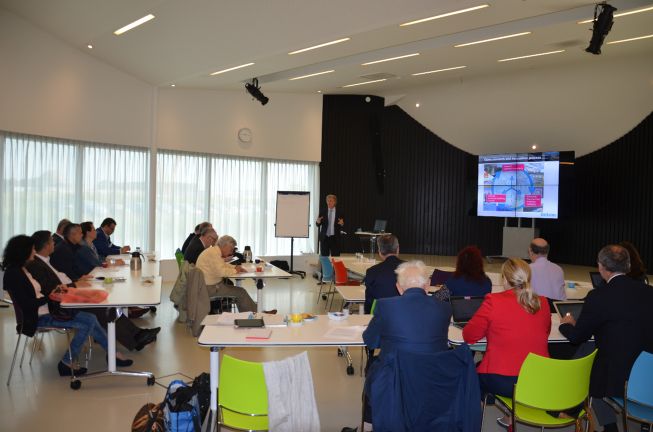 On the second day, the members of the delegation started with a visit to Deltares in Delft. Deltares is an independent institute for applied research in the field of water and subsurface, with offices in Singapore, Utrecht and of course Delft. They work on smart solutions, innovations and applications for people, environment and society. Their main focus is on deltas, coastal regions and river basins, as Ipo Ritsema explained. Deltares focuses on five areas of expertise: flood risk; sustainable Delta planning; Delta Infrastructure; water and subsoil resources and ecosystems and environmental quality. Michiel Blind, coordinator EU at Deltares, presented the main EU project in the framework of Horizon 2020.

The members also had an opportunity the visit the iD-lab, an interactive data research laboratory and the Delta Flume and Facility Hall. The Delta Flume is 300 metres long, 5 metres wide and 9.5 metres deep. The ten-metre-high wave board can simulate any wave pattern found at sea or in rivers: including waves up to 5 metres high! The Facility Hall is a unique test facility where it is possible to test at full scale the effect of extreme waves on dikes, dunes, breakwaters and offshore structures. 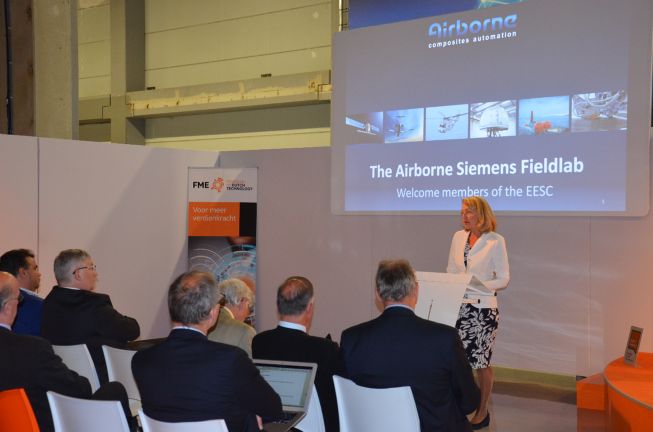 In the afternoon the members were welcomed by Ineke Dezentjé Hamming-Bluemink, President of Smart Industry at the Airborne Digital Factory Fieldlab. Ms Dezentjé emphasised that the further advances in digitization and new technology over the next decade will determine economic development and employment in the Netherlands. The combination of the Internet with new technology - 3D printing, the Internet of Things, Big Data and robot technology – will lead to a new innovative industry: Smart Industry. This smart industry will provide hundreds of thousands of new jobs for SMEs. Skilled and well-trained people with expertise in entrepreneurship and new technology are needed to secure these jobs. She pointed out that this is a train we cannot afford to miss. Egbert Jan-Sol, Director Smart Industry Program Office, gave a presentation about Smart Industry, the Dutch 4th Evolution.