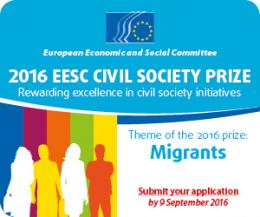 For nearly two years the large and unprecedented flow of refugees from war-torn or underdeveloped countries to the European Union has heavily impacted Europe's political and social life. Providing food and shelter for the masses of refugees reaching the EU, familiarise them with the new realities and cultural differences as well as supporting them through their integration process was and still is a major challenge which the concerned Member States could only face thanks to the spontaneous and overwhelming support of citizens and civil society in general.