The International Fiscal Association (IFA) held its 73rd Congress in London on 8-12 September 2019. The IFA was established in 1938 in The Hague, the Netherlands, and it is now a truly global association with more than 12,900 members from 114 countries. Employees from tax authorities, government representatives, corporate tax officers and experts from tax law firms are members.

Krister Andersson presented the EESC's tax work. He has been an IFA member since the 1990s and he served on the IFA Permanent Scientific Committee between 2012-2019.

The Congress was opened with a speech by Angel Gurría, the Secretary-General of the OECD. He concluded that through OECD-agreements, base erosion and profit shifting is to a very large extent exterminated. The very far reaching agreements regarding exchange of information means that there is nowhere to hide anymore. The area remaining for the OECD and the Inclusive Framework, which encompasses more than 130 countries, is to update international tax rules so that the digitalization of the economy is properly reflected. An agreement is expected during 2020.

The Congress dealt with many tax issues, such as how countries have implemented limitations of interest deductibility, Sharia law and taxation, Taxation of Space, Investment funds etc. Many sessions dealt with tax reforms and the ongoing work on taxation of the digitalized economy.

Mr Andersson participated in a panel together with Jeffrey Owens, former Head of Tax at the OECD; Mike Williams, Director International Tax MH Treasury, UK; Mick Keen, Deputy Director, Fiscal Affairs Department, IMF; Mukesh Butani, Partner BMR Legal, India; Claus Staringer and Pasquale Pistone, both professors at the Institute for Austrian and International Tax Law, Wirtschaftsuniversität, Vienna. The focus was on future tax reforms, the CCCTB and a potential abolishment of the corporate income tax. There was broad agreement on the panel that facts and analysis must be allowed to play a larger role again in tax reforms. Media and populism should not be main drivers in tax policy.

Taxation of profits of multinationals in the digital economy

advies EESC: Taxation of profits of multinationals in the digital economy 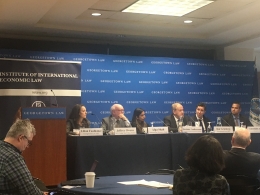 Mr Andersson participated as a speaker in an event on "Reimagining Taxation in the Age of Digital Disruption", in Washington DC, USA