During the meeting, the EU DAG will discuss with a representative of the European Parliament the progress in work on its report on implementation of the EU-Korea FTA. The Group may also inquire about the outcomes of the EP's mission to the Republic of Korea, which took place in May 2016. The European Commission will update participants on the state of play and the next steps in the ex-post evaluation of the agreement as well as implementation of the EU-Korea joint project related to the ILO Convention No. 111. The Commission will also inform the Group about the preparations for the meetings with Korea under the trade and sustainable development chapter, which will be held in Brussels by the end of 2016. The EU DAG will discuss moreover preparations for the next EU-Korea Civil Society Forum. 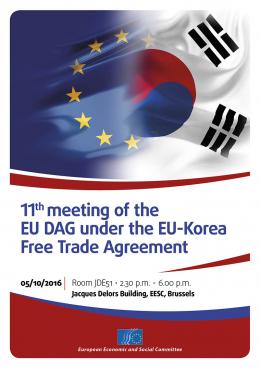 14th meeting of the EU-China Round Table

The 14th EU-China Civil Society Round Table took place in Brussels on 18 and 19 May 2016. Topics set up for discussion during this meeting of the Round Table were Innovation and economic development in rural areas, and Infrastucture and investment, in the framework of the One Belt One Road initiative and the establishment of the Asian Infrastructure Investment Bank (AIIB). The aim of the discussions was to find common ground and exchange ideas and best practices. 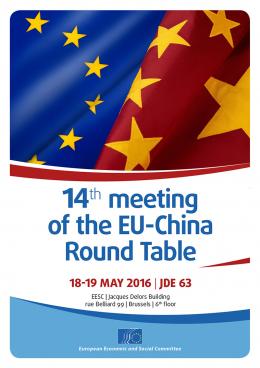