"The European Pillar of Social Rights: going forward together"

Alongside Commission vice-president, Valdis Dombrovskis, first vice-president of the Committee of the Regions, Karl-Heinz Lambertz, director-general of BusinessEurope, Markus Beyrer, and ETUC secretary-general Luca Visentini, president Dassis initially thanked the president of the EC, Jean-Claude Juncker, and Commissioner Marianne Thyssen for launching the consultation on the Social Pillar. He then referred to the EESC opinion on the European Pillar of Social Rights, which was adopted by the EESC Plenary on 25th January. He explained that as part of the EESC's consultation, its members had visited all 28 Member States where they met with more than 1800 representatives of organised civil society

In his speech, Georges Dassis also highlighted that social rights should be applied to all EU residents and cover them throughout their lives, recognizing that specific instruments or mechanisms may be necessary for the euro area. Moreover, he emphasized that no one should aspire to build anything on poverty, misery or distress, stating that "we must all agree that we want a market economy, but a social one".

In his concluding remarks, he stressed that is totally unacceptable to witness people today suffering from poverty, cold and hunger and he called for tangible measures to be taken, referring to the relevant EESC opinion on minimum income. Finally, he stated that we should not forget our past and the danger presented by the rise of populists and the extreme-right. He emphasised that we have to move forward together to achieve a united, democratic, solidarity-based, peaceful and prosperous Europe that is close to its people. 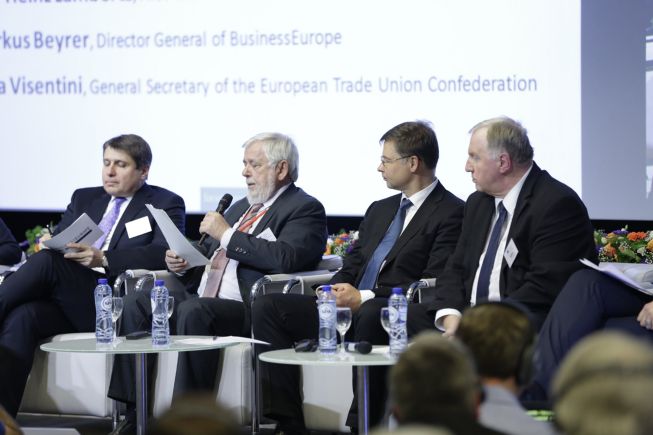