Despite the existing international legal framework for protecting the rights of persons with disabilities, legal and technical barriers persist in all EU Member States that may prevent or make it difficult for many Europeans with disabilities to cast their vote or run for office in the European elections this spring.

The obstacles they face are manifold, and include technical barriers such as polling stations that are poorly adapted to their needs, electoral information and campaigns that are inaccessible to deaf or blind people, and legal barriers such as automatic loss of voting rights following the removal of legal capacity or upon the appointment of a guardian, to name but a few.

The participation of persons with disabilities in European elections was the main theme of the hearing held by the European Economic and Social Committee (EESC) on 5 February. With fewer than four months to go until the election for the new European Parliament, the aim of the hearing was to explore the situation on the ground as regards the right of persons with disabilities in the EU to participate in these elections. The accessibility of election campaigns was also discussed.

The EU and all Member States have ratified the international convention on the rights of persons with disabilities, which very clearly refers to civic and political rights. This means that the EU as a whole and individual Member States have taken on the obligation to introduce changes that would make it possible for persons with disabilities both to vote and to participate in the elections, said Polish MEP Marek Plura, of the EP's Disability Intergroup, in his opening remarks.

This needs to take place in time for the EU's 2019 elections. We must leave no stone unturned in making sure that the upcoming election will be a model of accessibility, Mr Plura stressed.

Yet the situation on the ground is far from ideal, despite some best practices and good solutions in several Member States.

Persons with disabilities are not treated as equal voters and even less as equal candidates. We have first-hand experience of this, said Gunta Anča, an EESC member from Latvia and herself a person with disability, who recently announced that she would run in the EP elections in May.

According to the main findings of the report presented by Mr Pater at the hearing, in each of the 27 EU countries laws or organisational arrangements exist that will exclude some voters with disabilities from participating in the EU elections.

The vast majority of polling stations in the EU are not fully or consistently adapted to the needs of persons with various types of disability.  In eight Member States there are no alternative forms of voting, which means that anyone unable to come to the polling station will not be able to cast their ballots. In as many as 18 Member States, blind voters will not be able to vote independently without any assistance whereas in almost one third of EU countries people undergoing long-term treatment in hospitals have no opportunity to participate in elections.

The speakers singled out the deprivation of voting rights as being particularly worrisome.

About 800 000 EU citizens from 16 Member States are, on account of the national rules, deprived of the right to participate in EP elections because of their disabilities or mental health problems, Mr Pater said. In nine EU countries, they automatically lose their right to vote when their legal capacity is removed or when they have a guardian appointed.

This can lead to absurd situations, said Alejandro Moledo from the EDF. He described the case of a Spanish citizen who, when assessed as to whether his voting right should be reinstated, had to answer questions such as "what is the speed of light".

Raising awareness about people who are being deprived of their voting rights is one of the aims of the EDF's #EUDisabilityVote campaign, said Mr Moledo. Other campaigns launched by the EDF include efforts to make election campaigns accessible to everyone, as well as personal stories of persons with disabilities and their endeavours to exercise their right to vote.

Stephen Clark, who is responsible for the EP’s This time I’m voting campaign, said the EP was taking great care to ensure that its campaign was accessible to all, by providing subtitles for video material as well as making voice overs and sign-language interpreting available for all types of information. Likewise, guidelines are being provided to staff and volunteers so as to prevent any kind of discrimination against persons with disabilities.

Mr Pater said that, despite the fact that his report may paint a bleak picture of the EU with regard to the participation of persons with disabilities in the upcoming elections, the future may still be bright.  Several Member States have come up with solutions allowing persons with disabilities to exercise this right. For example, in eight EU countries they are allowed to vote by post; moreover, Estonia and Belgium have introduced electronic voting.

We should focus on positive achievements. If the best practices from all the countries were implemented, an ideal system would emerge in which every EU citizen with disabilities would not only enjoy full voting rights, but would also be able to choose the most convenient way to cast his or her vote, Mr Pater said. 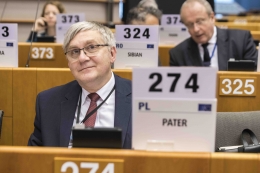 Millions of EU voters with disabilities will not be able to cast their ballots in EP elections
Reference number:
15/2019