The Commission proposal for a Directive on improving working conditions for Platform Work is a positive step. Clearly defining worker in an all-encompassing manner, to ensure legislation is not distorted to avoid its reach, is fundamental. Platform workers must enjoy equal treatment in all member states and platforms. A clear line must be set between real and bogus self-employment, both in platform and in other forms of work. Millions of workers are involved, without comparable (or any, depending on the situation) social protection and labour rights, who depend on this. We must avoid vague language and general affirmations of good intentions. Citizens have made clear that they expect Europe to deliver in Social Europe.

It is against the growing phenomenon of deceptive business models based on social dumping and exploitation, operating on the margins of what legislation considers an 'employment relationship' (and thus protects as such) that legal action, both by governments and courts, has increased across countries. The legislation, however, still suffers high fragmentation: a similar worker might be considered as such in a member state, and be covered by social protection and collective bargaining, and be invisible and self-employed in another. To tackle this, the European Commission proposed a directive in an attempt to improve working conditions in platform work and recognise fundamental social and labour rights while ensuring fair competition in the single market. The adopted EESC opinion focuses on the presumption of the employment relationship, on the pervasive role of the functions of the algorithmic management which determines the organisation, control and direction of work and on the collective rights to be recognised to all platform workers, in particular information and consultation rights.

Platforms have the potential to be innovative service providers and labour solutions, taking advantage of the best new technology has to offer. It would be, however, deeply unfair not to hold them to the same standards of social protection, social dialogue and workers' rights and social security contributions to which traditional companies are held, and which constitute an essential part of our economies and societies. Moreover, a well-functioning single market needs this approach to be common in all member states.

The platform picture is a well-known one today. An app everyone is using on your smartphone. A 'rider', someone usually on a bicycle loaded with a truck bag, speeds down the street, often struggling not to be run over by traffic. A few of them concentrated around the last trendy restaurant, ready to take food somewhere. A driver without a taxi sign picks you up, drives you home, and hopes for a 5-star rating and a tip. These are only two evident and visible examples of the complex world of the so-called platform workers, but their roles go far beyond: from internet crowdwork in design to provision of care services for the elderly, very few areas intensive in labour are out of their reach.

The initial appeal of it is clear: it offers its 'riders', 'drivers' or whatever other term (other than, evidently, worker or employee) flexibility, autonomy and additional income. Modern and comfortable for the customer, and useful for companies as a way of outsourcing labour cheaply (from translation to design, from care to food delivery). On paper, the formula is straightforward and has great potential for innovation. In some cases, this might be the case, with platforms offering a marketplace for services which opens possibilities that were impossible before.

In many cases, however, problems begin once questions appear on who are these 'riders' or 'partners' or any other euphemism according to the trade. These are generally self-employed people, and while in some few cases this might reflect reality, in many cases they are just bogus self-employed. They do not have their own business and work with different customers: they are just non-employed workers, without a great say on their timetable and with plenty of difficulties to decide if they accept one job or not (and penalties if they decline). This also means they enjoy in general far less social protection and social security coverage, and are vastly more exposed to health and safety risks. The problem only becomes larger if this is not an additional source of income, but rather the main one: the very low operating costs that make platforms work are often dependent on miserable wages. Essentially, a spin on the old fraud of a bogus self-employed used as cheap labour at their expense and the society's, escaping collective bargaining coverage and social dialogue, information and consultation rights.

In front of the non-employed workers there is not a traditional manager, but rather an app, and behind it, an algorithm. It is not a pure marketplace, where customers demand things and providers offer their prices. The algorithm defines when, and for how much, leaving the supposed flexibility and autonomy of the worker as rather disputable question. 19th century standards of capitalism are freely applied. Via a sleek application for your phone.

The EESC welcomes the European Commission's proposal for a Directive on improving working conditions in platform work. The EESC underlined that the platform economy opens up opportunities for both businesses and workers but also raises concerns, which need to be addressed at European and national level and through collective bargaining. The EESC deems it necessary to ensure equal treatment between "traditional" companies and those using digital means based on the functions of algorithmic management, when used to manage work organisation and employment relations: direction, control and/or organisational power. The EESC supports the aim of the European Commission's legislative proposal to address the very diverse regulations in the Member States on the legal classification of the employment relationship.

In this opinion, the EESC notes that platforms have "a generally positive impact on the economy", contributing as much to job creation and innovation, flexibility and autonomy for workers, as to ensuring income for workers (often supplementary) and allowing vulnerable people to access employment. It also notes that there are risks that must not be underestimated: (i) for workers, the denial of basic rights, including the rights to organisation and collective bargaining; precariousness; low pay; the increasing intensity of work; the extreme fragmentation of work on a global scale; the non-affiliation of workers to social security schemes; and (ii) for society, the increased risk of competition based on undercutting social standards.

Mišljenje EGSO-a: Fair work in the platform economy (Exploratory opinion at the request of the German presidency)

The definition of worker in the platform economy: Exploring workers’ risks and regulatory solutions

This research report has been produced in the context of a project entitled ‘The definition of worker in the platform economy’ (CES/FSA/09/2020), which was commissioned by the workers’ group of the European Economic and Social Committee. The report aims to contribute to the debates on platform workers’ risks and regulatory solutions. 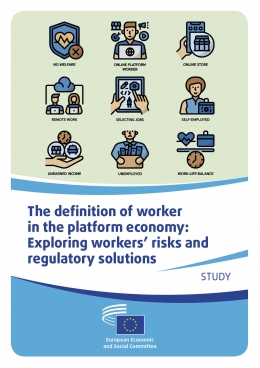