Addressing early school leaving amongst the Roma: the current situation and the way forward - Related Events

The current EU Framework for National Roma Integration Strategies runs till 2020 and is coming to an end soon.  A new initiative for Roma integration is currently being developed.

To strive towards a more effective post-2020 initiative, a thorough evaluation of the current framework is necessary.  This hearing seeks to offer a platform to assess the current framework's shortcomings and achievements, with a view to identifying the areas that still necessitate action. It will also feature a discussion geared towards providing recommendations for the upcoming post-2020 strategy.

The PSG on the inclusion of the Roma will, at its 11 April hearing on "Addressing anti-gypsyism in ethnic profiling practices", be looking at ethnic profiling in relation to the Roma community. Roma face discriminatory practices by the police and in the court system, such as Roma-targeted police raids and proportionately more Roma people being charged than people who are not of Roma descent. Such practices contravene Article 21 (1) of the EU Charter of Fundamental Rights, which prohibits discrimination on any grounds, such as race and ethnic origin. The PSG would like to highlight cases of malpractice in this domain, discussing examples from Member States, and also bring to light examples of good practice and discuss the way forward to help alleviate these problems. 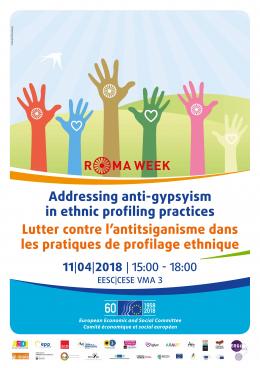 Roma still remain the most underrepresented group on the labour market, with high numbers of unemployment. Due to the combination of various factors, such as poverty and deprivation, low levels of education and skills and discrimination in both education and employment, there are still serious structural barriers for Roma. Therefore they do not benefit from mainstream or targeted measures/initiatives. The Roma Platform is a high-level event that will provide an opportunity to discuss education and employment for Roma. 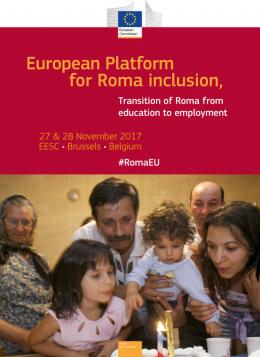 How to achieve Roma integration and avoid segregation in education

The PSG on the inclusion of the Roma will in its hearing on 15 November deal with segregation in education of Roma. Roma are often placed in special schools for children with learning disabilities. The Commission has launched infringement procedures against the Czech Republic, Slovakia and Hungary for school segregation As segregation has negative consequences on school attainment it severely affects the Roma though their entire life and maintain them in a situation of deprivation and poverty. 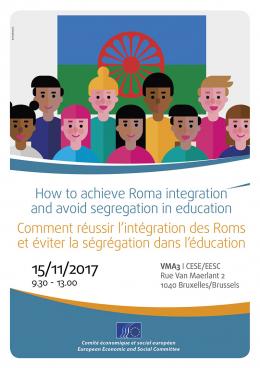 The hearing will explore EU funded projects and identify best practices and challenges. The main focus will be on the impact of funding on field work and on the design of projects and their implementation. Additionally, the sustainability of projects and absorption capacity will be discussed.

Equal treatment, equality bodies and other possible means of redress for Roma

The EESC has set up a permanent study group on Roma inclusion which will be monitoring the implementation the EU Framework for National Roma Integration Strategies from the point on view of Civil Society Organisations (CSOs).

Anti-gypsyism and discrimination are important barriers to Roma enjoying full rights and this hearing plans to map possible avenues for redress for Roma, including equality bodies. The hearing will allow for the exchange of best practices on how Roma can address violations of their rights. 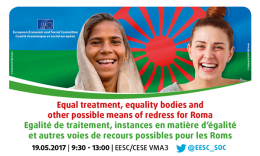 Evictions remain a serious problem across Europe and the input session will draw the attention to similarities between evictions in different kind of countries.

The session will help raise awareness of the issues, and allow for interchange between Roma organizations across Europe and is part of the continuous work of the EESC to bring attention to Roma issues. This will also be an opportunity for the EESC to deepen its work on evictions, following the showing of a film on Roma evictions in Italy ("River Memories") followed by a debate on this issue.