The EESC contributes to European Parliament views on the extension of the European Fund for Strategic Investments (EFSI 2.0) as a follow-up to the work on the EESC opinion

On 8 February the ECON and BUDG Committees in the European Parliament organised a workshop on the European Fund for Strategic Investments that Alberto Mazzola attended as EESC Rapporteur. Members of Parliament shared the view also prominent at the EESC that, although the EFSI is a young programme, it is more successful than expected. Several proposals and questions that were raised during the workshop in order to improve the EFSI were also addressed in the EESC opinion: such as the lack of visibility of the EFSI for SMEs and the proposal to launch a logo and an information campaign; how to judge the additionality; the transparency in decisions; the lack of information about the effect on employment; the absence of cross border projects so far; the opportunity to use national promotional banks and platforms; the opportunity to blend funds while keeping simplicity. Some contradictions emerged, for instance the need to keep the AAA rating for the EIB while the aim  is to invest in the countries with the greatest needs, as well as the trade-off between the quantity and quality of the projects.

Before the workshop, Mr Mazzola presented the EESC Opinion on the extension of the European Fund for Strategic Investments to the European Parliament Rapporteurs of the BUDG, ECON, TRAN, REGI, EMPL and ITRE Committees. All rapporteurs showed great interest in our opinion and its recommendations. 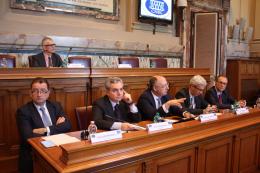 EFSI: a tool for growth

On 23 January, Italy's National Council for Economic Labour (CNEL) held a meeting, under the auspices of the European Economic and Social Committee, entitled "EFSI: a tool for growth". The conference had two aims: to promote the use of EFSI and to examine how this financial instrument could be useful in the period 2021-2027 in relation to the European Commission's priorities: research, Erasmus, cohesion policy, agriculture, Ten-T, defence and immigration.