EESC opinion: 10 years of Eastern Partnership: reflecting on achievements and shaping the future policy of the EaP 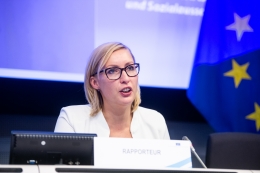