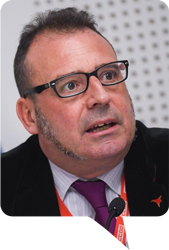 In my organisation, we have taken a three-pronged approach:

ccoo [dot] es), so that anyone with a job-related question linked to coronavirus could get information and advice from the union. I myself was on call from 8 a.m. to 2 p.m. for several weeks.

On the basis of the doubts and queries that reached us through the calls a COVID-19 response manual was compiled. The lines and email address were launched on 21 March and are still open.

As regards workers, my organisation held ongoing negotiations with the government, for example regarding the regularisation of temporary contracts, conditions for guaranteeing full salaries, and extraordinary benefits for freelancers and domestic workers.

At the same time, we continued negotiating mechanisms to make requirements more flexible in order to prevent migrants from becoming irregular as a consequence of the crisis. In this respect, for example, we managed to empty foreign detention centres, which were serving no purpose as the borders were closed and migrants could not be sent home. These centres would also have had a high risk of contagion. In addition, we managed to extend seasonal work permits for all seasonal workers, such as those who had come to pick strawberries in February: we extended their permits till September to cover other seasonal agricultural work such as peach picking.

Finally, on 5 May 2020 I spoke with the EU Commissioner for Home Affairs, Ylva Johansson. The Commissioner supported the idea of ​​an inclusive recovery which also includes migrants across the EU and facilitates their stay while highlighting the need to fight lies and xenophobia.