The conference focused on the Energy Union, taking stock of the progress made in achieving its goals and assessing the challenges still to be faced. Participants discussed how citizens could get involved and benefit from the Energy Union, and explored opportunities to improve people's and civil society's economic and political ownership of the Energy Union.

This union which we are calling for cannot be achieved without the active involvement of organised civil society, whose role in the process must be specified and made permanent, said Pierre Jean Coulon, president of the EESC's Section for Transport, Energy, Infrastructure and the Information Society (TEN). The EESC", he added, "is pursuing a vision of an Energy Union for the citizens, by the citizens, and with the citizens. All citizens must benefit from the opportunities the energy transition offers but at the same time be protected from the risks associated with it.

Dominique Ristori, director-general of the European Commission's DG Energy, was on the same wavelength, stressing: Social equity is at the heart of the Juncker Commission's priorities. The energy transition is also an economic and social opportunity; we must not leave anyone behind.

The debate highlighted the following barriers to realising this vision and put forward some practical solutions to overcome the pending issues in the future.

First and foremost, energy poverty – i.e. the inability to access adequate heating and electricity – is a major challenge for Europe's energy transition. A lack of proper household energy services makes it impossible for many people to participate fully in economic, social and political life.

The EESC has been instrumental in raising awareness of energy poverty at European level and has made a number of concrete recommendations over the years. However, progress on the main stage of EU policy-making has been slow. EESC members called for the establishment of an EU Energy Poverty Observatory back in 2013, but it has only recently been set up. The Committee therefore underlines the importance of getting the social dimension of the energy transition right, and intends to continue working closely with the other European institutions and stakeholders in order to find solutions to the issue of energy poverty.

Secondly, the shift to renewables offers energy consumers significant social and economic opportunities, in particular where the energy transition empowers small-scale entities and households to become active participants as suppliers in their own right in the emerging energy markets. Some concerns have been raised about the costs of the transition to low-carbon energy systems. However, rising retail energy prices cannot be held fully responsible for energy poverty, given the decline in wholesale energy prices and the breakdown of rising retail prices, showing that a significant proportion of the rise in prices comes from fees and taxes. In addition, the costs of energy generation from renewable sources have dropped sharply over the last few years.

The EESC was among the first institutions to take an interest in changing the role of consumers to "prosumers", that is, customers who both consume and produce energy, redistributing excess electricity to others in a grid. Making this a reality depends on overcoming a number of barriers to active participation in energy markets, supported by a concerted effort by policy-makers at EU, national, regional and local levels and in close coordination with civil society organisations.

Finally, addressing energy poverty and empowering energy "prosumers" is paramount in order to underpin the economic citizenship of Europeans. However, it is also important to directly strengthen the political involvement of citizens and civil society in energy policy-making.

The European Commission initially recognised the need for an energy dialogue with stakeholders, but has rather neglected this aspect of the governance of the Energy Union in its recent proposal. The EESC is using a variety of mechanisms to promote dialogue between EU and national policy-makers, civil society and citizens: it adopts opinions, it actively participates in policy discussions across Europe, and once a year it publishes an opinion on the State of the Energy Union in response to the Commission's annual progress report.

The EESC opinion on the third report on the State of the Energy Union is currently being drafted by Toni Vidan and Christophe Quarez, and is due to be adopted at the April plenary session. 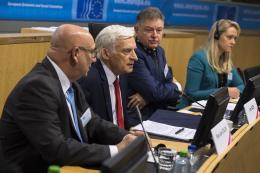