"We are fighting for everybody's future", says climate activist Greta Thunberg at the EESC

The European Economic and Social Committee (EESC) discussed the key role that organised civil society must play for a real "rEUnaissance" at an event held on 21 February 2019 that brought together top leaders of EU institutions and civil society organisations from across Europe just over 90 days ahead of the European elections.

Referring to growing Euroscepticism, xenophobia and racism across Europe, EESC president Luca Jahier said that democracy was under attack and that European values were being questioned. "This is not the time for resignation; it is the time to dream and to dare", he said. The EESC has a key role to play: "We give voice to the thousand faces of 'Europe at work'. We have to make sure that this dialogue will never be compromised. The worst thing would be to remain silent. We have instead to make the voice of the 'good ones' heard", he continued. "Whatever it takes, we will dare to act for a sustainable Europe", concluded Mr Jahier. 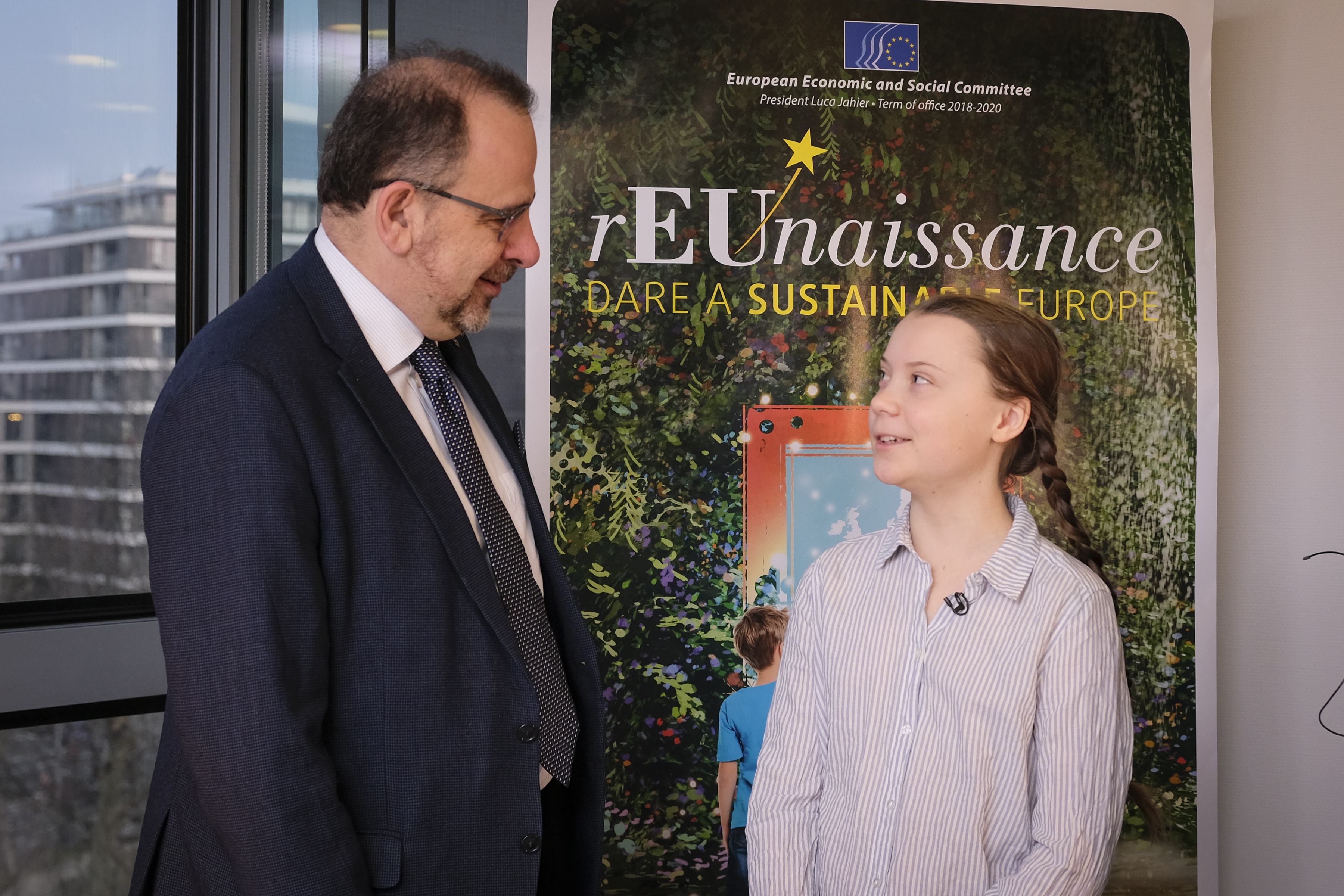 "We need to protect the biosphere, the air, the oceans, the soil, the forests", said 16‑year‑old Swedish climate activist, Greta Thunberg, who made it clear that it was imperative to take action now against climate change. She warned that our planet was only some 11 years away from an irreversible catastrophe. "We are not fighting for the future of young generations only; we are fighting for everybody's future. We have started to clean up this mess and we will not stop until we are done", she concluded.

The president of the European Commission, Jean-Claude Juncker, was supportive of the movement initiated by Ms Thunberg as: "it can bring about change; it has spread to many cities and now there is a common message in the streets of Europe". He also pointed out how the Juncker plan had greatly contributed to raising green investment in Europe during his term of office.

The president of the European Committee of the Regions, Karl-Heinz Lambertz said the event indicated "a common will to work together". "We are all talking about the same thing: rebuilding the Union", he stated, adding that "we should not ignore what has been done, but we need to start with a new move. Our citizens and regions are still the uncharted territory of our democracies. We need to fully involve them in building Europe. We need to reform the Union from the bottom up".

The Civil Society for rEUnaissance event was organised to mobilise civil society in support of European democratic values as enshrined in the Treaties and of charting a course for the future of Europe ahead of the EU elections. BusinessEurope director-general Markus J. Beyrer, ETUC secretary-general Luca Visentini and Solidar secretary-general Conny Reuter participated in the debate along with many other speakers, including Madeleina Kay, aka the 'EU Supergirl'. (mp)