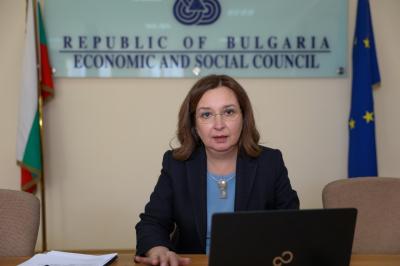 The President of the National Assembly Tsveta Karayancheva congratulated the new President of the ESC Zornitsa Roussinova and the members of the ESC, emphasising that the diverse expert potential of the Council and its direct relationship with citizens is an important mechanism and part of the democratic process of legislative and administrative decisions. The President of the National Assembly asked for even more active participation of ESC in the social development following its basic principle - consent and unity for the good of Bulgaria.

The EU Commissioners Mariya Gabriel - Innovation, Research, Culture, Education and Youth, and Nicolas Schmit - Jobs and Social Rights participated in first plenary session. They highlighted the role of the civil parliament in achieving the goals of the European Union. Mariya Gabriel underscored the need for the cooperation of all European citizens and institutions to build a just future, a fair transition to a green economy and rapid digitisation. Nicolas Schmit stressed on the role of social dialogue in the process of rebuilding jobs after the coronavirus crisis, in creating new quality jobs and especially in expanding youth employment opportunities through EU programmes.

Deputy Prime Minister Tomislav Donchev also attended the plenary session. He stressed that many of ESC's proposals have been adopted in the new version of Bulgaria's Recovery and Resilience Plan. Citizens now want not only to know, but also to participate in governance and the decision-making processes, he said. Therefore, the role of ESC is to ensure new forms of civil dialogue and to engage people in the decision-making process so that political decisions are better.

Zornitsa Roussinova proposed to formulate thematic framework for the activities of ESC for the entire four-year term as each of the groups highlighted its own specific topics related to the development of Bulgaria.  At the next February session, ESC is to construct its standing commissions and adopt the plan for the activities of the council for 2021.

ESC members expressed their gratitude to the former President of ESC Prof. Lalko Dulevski for his work for the development of civil dialogue.