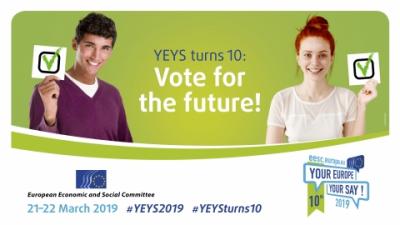 On 21 and 22 March 2019, 102 students and 36 teachers from all 28 EU Member States and the five EU candidate countries (Albania, North Macedonia, Montenegro, Serbia and Turkey) and from one Brussels-based European School, accompanied by three participants from previous YEYS events, met at the EESC in Brussels for Your Europe, Your Say! 2019.

This year, the title of the EESC's youth event was "YEYS turns 10: Vote for the future!", referring to the European elections on 23-26 May and to the fact that this year marks the event's tenth anniversary since it began in 2010.

Before the two days in Brussels, each of the 34 schools, selected by lot, was visited by an EESC member who helped prepare the students for the debates with their peers. Upon their arrival at the EESC, the participants were welcomed by Isabel Caño, EESC vice-president responsible for communication, after which an interactive digital publication created for YEYS's tenth anniversary was presented to them (now available at www.eesc.europa.eu/EESC-youth-event/YEYS/index.html).