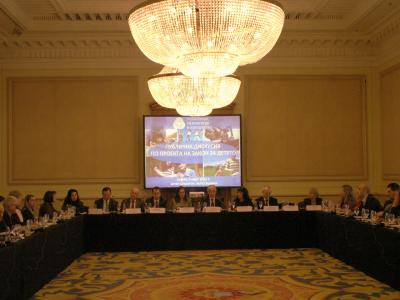 The Economic and Social Council of Bulgaria /ESC/ in cooperation with the Ministry of Labour and Social Policy organised a public consultation on the Draft Children Act on 6th March 2012, which attracted broad public interest. It was attended by more than 100 people, including representatives of the Bulgarian government, Bulgarian Parliament and local authorities, social partners and representatives of over twenty-five NGOs, parents, scientists, experts and others.

Prof. Lalko Dulevski, President of the ESC presented to the participants in the discussion the main findings and proposals adopted by the Resolution on the Draft Children Act on 24th February 2012.

The council associates with the position of the European Economic and Social Committee that it is vital children's rights are not to be mixed with the general human rights since the children are in need of specific legal protection.

Within a fruitful discussion all the stakeholders had the opportunity to express their positions on the bill. Despite the different opinions, some of them contradictory, specific constructive suggestions were made which united most of the attendees.

As a summary of the debate Prof. Dulevski paid attention to the children's problems which would not be solved only with the Act adoption, but with horizontal policies, strong coordination and reliable monitoring system.

In conclusion, the representatives of the Ministry of Labour and Social Policy undertook to take into account the submitted in written proposals and those made in the public discussions.