The EESC pinpoints the 7 key issues for Europe's future. 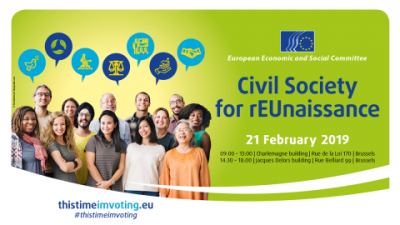 As part of its Civil Society for rEUnaissance conference on 21 February, the EESC organised seven parallel thematic workshops, focusing on 7 issues which will be decisive for the future of Europe.

The panels, which gathered together some 230 people, saw EESC members and other participants discuss how to mobilise civil society in the run-up to the European elections. What Europe do we want to see emerge from the elections was the basic question running through the discussions.

The workshops focused on the following issues:

The questions sparked lively discussions among the many participating civil society organisations, which provided a wealth of input.

Overall, there was consensus that Europe needed to make a qualitative leap in communication to better bring home to ordinary citizens the real benefits the EU has meant for them and showcase its success stories.

At the same time, it also needed to take a critical look at some of its policies against a background of increasing poverty and inequalities, international competition and fear for the impact of massive digitalisation. A new, more sustainable economic model taking sustainable development goals as its compass was called for.

The need to develop a European cultural identity through education, to encourage Europeans to take ownership of their multiple identities and realise that they could be proud to be Europeans without betraying their local roots was prominent in discussions. The key role of European values in shaping identity and the need to hold on to these values now coming under threat was also a recurrent theme.