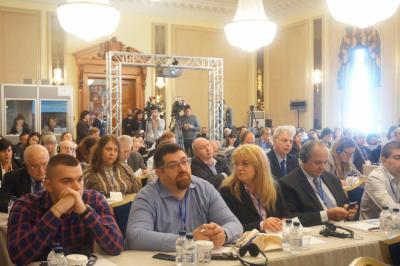 There is a need to strike a balance in protecting consumers' rights and the responsibilities of digital service providers at the European level. By now consumer rights in the context of the digitization of the economy have been rather underestimated at the expense of the development of the digital economy. This is the common position reached by the participants in the discussion "Digital Economy: Benefits for Consumers" organized by the European Economic and Social Committee (EESC) and the Bulgarian Economic and Social Council (ESC).

With the conference, held in Sofia, EESC and ESC celebrated the 20th anniversary of the World Consumer Rights Day.

ESC President Prof. Lalko Dulevski, at the opening of the conference, stressed that a European mechanism is needed to guarantee the rights of consumers in the digital economy. In the transition from the analogue economy to the digital one, the accent, according to Prof. Dulevski, must be on raising awareness about consumer rights and on the training and education of children about their opportunities and rights within this new environment. He also stressed that we need to be very careful about children, as a specific group of consumers, when ensuring that they have access to digital literacy but at the same time making sure that they are protected against possible risks.

Bulgarian Minister of Economy Emil Karanikolov informed the participants that the country will make every effort to move forward rapidly two new European legislative initiatives - the Directive on digital content contracts and the Directive on the sale of goods. These two bundles of proposals support the construction of the Digital Single Market and, according to the Minister, the changes will increase consumer confidence in the digital economy. Minister Karanikolov stressed that a priority under the Bulgarian Presidency will be given to the package of legislative changes called "New Deal with Consumers" which provides a legal framework for the protection of consumers, including users of digital services.

Martin Zicker, Chair of the Group on Single Market, Production and Consumption at the European Economic and Social Committee, stressed that organized civil society would urge the European Commission for clear definitions in the directives on business relations with digital service users and the so-called "shared economy" whose consumers are getting more and more.

Francisco Fonseca Morillo, Deputy Director General, Directorate General "Justice and Consumers" of the European Commission, introduced the audience to the content and objectives of the legislative changes drafted by the Commission in the two new directives and expressed the hope that they would respond to the need to protect consumers' rights in a digital economy. He answered a number of questions to participants about new bodies at the European level that would represent consumers in court, collective claims, responsibilities of national governments and consumer organizations. He urged civil organizations to discuss carefully the legislative changes that the EC is expected to propose for a broad discussion in May this year. We will fully comply with the proposals of civil society organizations to achieve a good result," said Francisco Morillo, but the work will not end with just these two sets of legislative changes, he added.

Interesting observations and suggestions were shared by experts from the EU and Bulgaria. The conference was attended by more than 100 representatives of institutions, businesses, civic organizations, half of them representing organizations in EU Member States and the EESC.