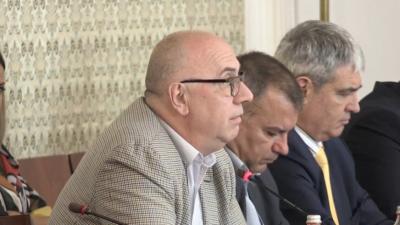 The discussion organised by the Standing Committee on European Affairs and Oversight of the European Funds at the National Assembly on "The Future of the Cohesion Policy of the European Union during the New Programming Period 2021-2027 and the Participation of Bulgaria in the Negotiation Process" was attended by the ESC President Prof. Lalko Dulevski, Ph.D., Plamen Dimitrov - President of the Confederation of the Independent Trade Unions in Bulgaria and ESC member, Ivelin Zhelyazkov - Association of Industrial Capital in Bulgaria and ESC member, as well as Bogomil Nikolov - Chairman of the Bulgarian National Association "Active Consumers" and ESC member. The discussion was also attended by Bulgarian Members of the National Assembly, Members of the European Parliament, Deputy Prime Minister Tomislav Donchev, Permanent Representative to the EU Dimitar Tsanchev and other representatives of institutions and associations.

Vice-President of the National Assembly, Kristian Vigenin, stressed that this discussion continues the tradition according to which important for Bulgaria topics are addressed by the Committee, so that Bulgarian positions may be defended before the European institutions.

Deputy Prime Minister Tomislav Donchev emphasized in his main statement that the Cohesion package for Bulgaria during the new programming period is expected to be increased by about 8 percentage points, which means approximately 9 billion Euros of EU funding.

In his presentation before the forum ESC President Prof. Lalko Dulevski, Ph.D. highlighted one of the significant challenges raised by two successive ESC surveys among more than 2,400 students completing their secondary education - the attitudes of young people to migrate from their places of origin. ESC acts on the migratory attitudes of young people demonstrate that even before finishing their secondary education between 2 in 3 and 3 in 4 of graduates are willing to leave their place of origin and move - mostly to a bigger town or abroad, Prof. Dulevski said.  The main reason indicated by them is their search for better jobs and better remuneration for their work. Therefore, in the ESC, we have discussed many times the question of whether we can find an indicator of the convergence process that would show more accurately and realistically the results of the invested funds, measures, policies and efforts of our society as a whole, Prof. Dulevski said. If there is such an indicator, the direction of the effort will be more accurately determined, he added.

Prof. Dulevski expressed his appreciation of the discussion organised by the National Assembly as a step in the right direction, as a necessary institutional and civil dialogue on one of the most important topics for the future development of Bulgaria. But, he continued, it is important for us when we talk about the key significance of EU funds during the next programming period, to answer the question: who are the persons that we do all this for, who are the persons we direct all our efforts to, what results to expect. Because, according to Prof. Dulevski, investments of European, national, public or private funds should be directed to the expected results, thus defining the intervention areas.

When we talk about cohesion and we measure it in different ways - through GDP or purchasing power, we obtain numbers. But the people measure it in a different way, ESC President stressed. According to him, a new type of migration is already emerging - social migration, where people look not only for better wages and better jobs, but for something more - they already have different criteria for lifestyle, communication, social environment.  Better living conditions make them start looking for a new place to live.  The problem is quite serious, even more serious than external migration. The consequences of internal migration are thoroughly considered in ESC acts. They create serious difficulties for small settlements and for whole regions, Prof. Dulevski said.

According to the ESC President, the main criterion for the efforts we are about to make is to find a better formula for dealing with internal migration, with the massive outbound movement from smaller settlements. Because one day we will have good roads, good infrastructure, but people will not be there, Prof. Dulevski said. And here comes the question - where exactly is the balance between all instruments, because people want jobs, decent remuneration, good education for their children, good overall infrastructure, good health care, public order and security. We need to look for synergy between all instruments to create a truly favourable living environment in smaller settlements, Prof. Dulevski said. In this context, he proposed that the same type of talks on the implementation of EU funds during the next programming period should be conducted primarily with the people on the ground in order to bring the policies, tools and projects to them, to convince them of the usefulness of the cohesion policy, Prof. Dulevski concluded.

Plamen Dimitrov proposed a detailed assessment of the cohesion policy that has been implemented in Bulgaria in recent years, what we have achieved and where we are in comparison with other European countries. He called for the new programming period to set measurable targets and indicators and to define demography, ecology and digital skills as the main funding priorities.

Bogomil Nikolov called for the focus of funding to be on human resources, but not to focus only on the illiterate and poorly educated, but on the training of specialists in the implementation of the circular economy, digital technologies, i.е. in those areas that bring added value.

Ivelin Zhelyazkov stressed on the need for radical reforms in higher education, because Bulgaria has no university ranked in the European university networks. He identified transport connectivity as another key priority for the new programming period.

Deputy Prime Minister Tomislav Donchev summarized the discussion and answered some of the questions. He pointed out that the cohesion policy should not be mistakenly associated only with solidarity, it is one of the instruments that must balance the single market and, while there is a single market, a cohesion policy must also exist.