The Bulgarian ESC for a stronger and more solidary Europe 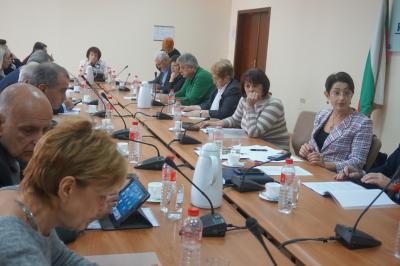 At its most recent Plenary Session the Economic and Social Council adopted two resolutions on the future of the EU. The main topics of the resolutions are the economic and social dimensions for a stronger and more solidary Europe. Ever since 2015, ESC has actively participated through its own acts and organized discussions in European debates on the future of the EU. With the latest adopted resolutions, ESC expressed the main positions of the Bulgarian organized civil society on the most recent issues to be resolved next May during the summit of European leaders in Romania. In both resolutions, ESC urges the EU to maintain its unity and develop as a strong and competitive alliance and as a fair and solidary community.

In its resolution on "The Economic Dimension for a Stronger Europe", ESC clearly expressed the unanimous position of its members that Europe faced the challenge of becoming an even more powerful player in the global economy, becoming a model for progress based on competitiveness and cooperation. ESC reported on the emerging changes in the world as a result of new technologies, demographics, trade, etc. and believes that the EU should not only endorse but also understand and develop the four fundamental freedoms of movement. According to ESC, the overall objective of the EU must be economic integration and cooperation, economic cohesion and European economic sovereignty. Furthermore, in its resolution, ESC considered the factors that are of major importance for the new economic dimensions of the future development of the EU - the Single Market, the Eurozone, the Banking Union, the Energy Union, the Digital Market, the Capital Market, support for small and medium-sized enterprises, customer protection, the social economy and entrepreneurship, etc. whose development will increase citizens' confidence in the European institutions and the European Union as a whole.

ESC's position on the Commission's proposals to strengthen the institutional framework of Economic and Monetary Union through separate institutions and the budget of the Eurozone is that they would lead to a division of the EU into separate concentric circles whose interaction to achieve common goals would be difficult to achieve, while the process of convergence of non-eurozone countries would significantly slow down.

According to ESC, one of the EU's most important objectives, as it has been so far, is for the Union to ensure economic stability, balanced economic growth, higher quality employment and sustainability of public finances for all Member States.

As in other positions, ESC drew attention to the fact that economic development and social development must be mutually balanced and interrelated.

The second resolution is entitled "Social Dimensions for a More Solidary Europe". In it ESC expresses its support for the development of the EU on the basis of the values ​​united in the European Social Model - the main concept of social policies in the Member States. Its preservation and upgrading for ESC is a guarantee for future pan-European progress, based on the three core values ​​- solidarity, equality, competitiveness. ESC supports and appreciates the important step of the EU towards more solidarity, more social justice and more guarantees of social rights in Europe through the establishment and implementation of the European Pillar of Social Rights Pillar (EPSR). It also emphasizes that, in order to achieve the social dimensions of a fairer and more convergent Europe, it is necessary to target targeted financial resources for the realization of the EPSR and the upgrading of the European Social Model both through the European structural and investment funds European Social Fund) and through national funding - public and private investments aimed at creating high-quality, high-quality jobs; education and training; innovation and research; quality and affordable public services and social investment.

In the context of achieving the goal of greater convergence between Member States, ESC is convinced that one of the most important policies is the cohesion policy. In the future, the cohesion policy will have an even more important role to play in overcoming the differences between Member States that can become sources of undesirable controversy or even tensions between them. That is why the cohesion policy needs to be improved and expanded, the resolution indicated, it should not limit itself, especially in terms of reducing the resources that ensure its implementation. According to ESC, the main emphasis when deciding on the future direction of EU development must be youth policies, because the future belongs to the young. In this context, ESC's position is that new and integrated policies are needed for young people to find wider opportunities for quality education, labour market realization, and not least to enhance their participation in public life and decision-making at all levels in the EU.

ESC puts forward a number of proposals for building and developing social policy in relation to the challenges we face to the Fourth Technological Revolution and the changes it carries and is already imposing and which will have a very rapid and bright imprint on all spheres of public life. The document also highlights the demographic effects, the social protection and equality, and overcoming social differences.

The two documents will be part of a discussion organized by the ESC with the European Economic and Social Committee on 30 November 2018 in hotel Sofia Balkan.