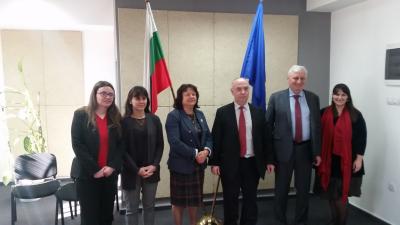 The two-day mission of the European Labour Market Observatory of the  European Economic and Social Committee (EESC) held meetings and  discussions with various institutions and organizations to explore the application and results of  The Council Recommendation of February 2016 for integration of the long-term unemployed into the labour market. The mission's special goal was to record good practices, experience and  innovative methodologies in the involvement of civil society in the fight against long-term unemployment. One representative of each groups of the EESC was included in the mission. Representative  of the group of employers was Georgi Stoev, the trade unions were represented by Dr. Ivan Kokalov, and the group with other interests - Prof. Dr. Lalko Dulevski. The mission was coordinated by the administrator  of the Labor Market Observatory  Anna Dumitrache.

The mission of the Observatory covers six EU Member States.  Bulgaria, Germany, Spain, Croatia, Italy and Sweden have been selected on the basis of the specific situation within countries to illustrate good practices and challenges in the EU. The problem of long-term unemployment in Europe has become very acute in the years of the crisis and during the recovery period, according to Eurostat, half of the unemployed  are long-term unemployed  - or persons who have not found a new job for more than one year. For Bulgaria this problem is also significant.

The first mission meeting was held at the Ministry of Labour and Social Policy with the Director  of the Labour Market Policy and Labor Mobility Directorate Elka Dimitrova. At the meeting Ms Dimitrova noted that the cooperation with the Economic and Social Council (ESC) - as an institution of organized civil society, has been useful for the ministry's work for years. With its instruments dealing with labour market problems and particularly the part related to the reintegration of long-term unemployed into the labour market, the ESC contributes to solving complex social problems. The MLSP Director noted specific acts of the ESC, whose development was attended by representatives of the Ministry's Directorate, and after the ESC adopted the relevant act, the proposals were included in the Ministry's strategies and plans. She also emphasized the possibility of hearing the voices of not only other relevant institutions but also of other civic organizations through the ESC's consultations on the subject. In her presentation to the mission, Elka Dimitrova listed the measures applied in Bulgaria, as proposed in the Council Recommendation. Dimitrova said that  the share of long-term unemployed  in Bulgaria for the last one year only  decreased by 25% from 99,000 in 2016 to 77,000 in 2017.

At a meeting at the University of National and World Economy, the mission spoke with representatives of the academic community, the Student Senate, youth organizations, students, representatives of the Roma community and others. Specific recommendations  for reducing long-term unemployment, included the elaboration of the Long-term Denial Strategy, the review and improvement of legislation  by removing legal and administrative obstacles for the employment of disabled people, the establishment of a Consultative Council of the Human Resources and Social Protection Department at the University of National and World Economy with the participation of trade unions, employers, businesses and students, stimulating employers to employ long-term unemployed persons. Other recommendations focused on the development of micro-enterprises, an extension of the initiative "My first job"  at the student level, more measures towards the employment of women in the labour market, etc.

The Labor Market Observatory continues its study in five other Member States, and will then produce a comprehensive report on good practices in the implementation of the Council Recommendation to reduce long-term unemployment.