Final declaration of the Presidents as a conclusion to the seminar “Will the Climate Conference keep its promises?" 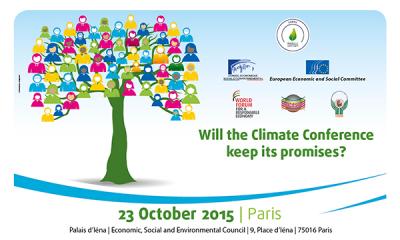 Kofi Annan had stated that the “non-governmental revolution was the best thing that has happened to the United Nations in a very long time” and that “numerous achievements would have not been possible without the actor’s determination and contribution”. In relation to the results of the Addis-Ababa conference on development funding, Ban Ki Moon declared that “many concrete commitments would have not been there without civil society’s commitment and implication”, adding that it plays a key role in the “resource mobilisation at the national level and pressuring donor countries for them to respect their commitments”. Even if the process of international climate negotiations is, ultimately, in the hands of State actors, it is evident that the pressure exerted by civil societies and their organisations plays nowadays a decisive role in creating a common reflection on which international agreements are built.

No fewer than 75 countries have asked their civil societies, understood as the gathering of professional organisations, workers and non-governmental organisations, to express themselves within the framework of Economic and Social Councils (ESCs) which are institutions with constitutional or legal basis.

As the United Nations Climate Change Conference in Paris in December 2015 (COP21) is expected to result in a universal climate agreement, many ESCs have worked actively in the recent months to encourage and mobilise their members to upscale engagement towards climate action.

On 23 October these networks, in collaboration with the Lille World Forum for Responsible Economy, will hold a public conference to express with one voice the fears and hopes of the civil society, with the intention to lead to strong recommendations to the climate negotiators. The event will reflect on the common Europe-Africa efforts for the development of a low carbon economy; it will propose local, industrial and behavioral solutions to climate adaptation and mitigation and present ideas for the governance of implementation of the international agreement once adopted in Paris.

Programme: Will the Climate Conference keep its promises?

Final declaration of the presidents as a conclusion to the seminar “Will the Climate Conference keep its promises?”

Conclusion of the symposium"Will the Climate Conference keep its promises?"