ESC of Bulgaria: We want a peaceful, stronger and fairer Europe 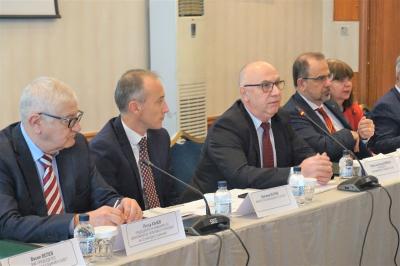 "What Europe Do We Want?" was the topic of a public discussion organized by the Economic and Social Council of Bulgaria (ESC) and the European Economic and Social Committee (EESC). Participants in the discussion with concern and expertise raised a number of challenges that organized civil society in Bulgaria recognized as fundamental and decisive for the future development of the EU.

Prof. Lalko Dulevski, President of the ESC, said in his opening speech that we should have one single goal and it is to continue the most important peaceful, political, economic and solidary project in the world, which is the European Union. This requires from our generation and our followers rationality, ambitious goals and compromises. Prof. Dulevski called for a sensible and useful dialogue between all citizens at both the national and the European level. He pointed out as a positive example the principle of reaching agreement through mutual and measured compromises. This approach is useful and works in institutions such as the ESC and the EESC. It is difficult to make decisions on the basis of compromise and agreement between groups with inevitable contradictions, such as employers and trade unions, said ESC's President. This model of civil dialogue has been working for 60 years in the EU and 15 years in Bulgaria and has proved to be successful. The model of reaching agreement through mutual compromises is beneficial, according to Prof. Dulevski. During its 15 years of operation the Bulgarian ESC has worked successfully with three presidents, six parliaments, six governments, and three provisional governments. This is a model that can also be applied by states when it comes to the future of the EU for the lives of our children, concluded Prof. Dulevski. He highlighted the good cooperation between ESC and the EESC as an achievement of the two institutions, which resulted in a number of common positions adopted at both the national and the European level.

In his speech, EESC President Luca Jahir called on all of us to make effort for the European project to recover and continue with new inspiration, because there is no other alternative for European countries. He referred to the words "United we stand strong" written above the gate of the Bulgarian National Assembly building and stressed that this should be the major call to action for the forthcoming European elections. According to Luca Jahir, currently the EU is not in good shape and there are three major challenges that are crucial to its future development. The first is the sustainability of the EU, which will be guaranteed by the 2030 Programme and deserves the support of all Member States. The second important factor for the future of the EU is the preservation of peace through the most important mechanism - the European Union. Thanks to the European project, Europe is experiencing the longest peaceful period in its history - a period of growth and understanding. This process must continue as a guarantor of the EU's unity, the President of the EESC said. Thirdly, he pointed out that culture and heritage are at the heart of European society, characterized by humanity, respect for human dignity and solidarity, and an example for the rest of the world. According to Luca Jahir, three challenges need to be tackled urgently: the adoption of the European budget, Brexit and the upcoming European Parliamentary elections in 2019.

In his speech, the Minister of Education and Science Krasimir Valchev congratulated the organizers for the discussion and stressed the importance of quality education for the young people who are the carriers of innovation in Europe. He stressed that the positive trends in the economic situation and the positive trends in education must lead to the reversal of the outward emigration that has had a negative impact on Bulgarian society.

Petar Kanev, chairman of the Economic Policy and Tourism Committee of the 44th National Assembly, drew attention to the role of small and medium-sized businesses for the future sustainable development of the EU by stating that the administrative burden on small businesses should be reduced be stimulated and supported at the European and the national level.

ESC has proposed two main topics for discussion that were previously developed by the council. The first was linked to the economic dimension for a stronger Europe. During the discussion on this topic, Vasil Velev, deputy chairman of the ESC from the employers' group, said that it is necessary to reflect and develop the four freedoms of movement in the EU, especially those that negatively affect the member states of Eastern Europe and often deplete their human resources. Vasil Velev called for rehabilitation of work as a value in the EU and expressed concern that Europe is losing its position as a leader in the international markets. According to him, new policies and new people are needed to restore the EU's competitiveness. Konstantin Trenchev, Vice-President of the ESC from the trade unions group, drew attention to the so-called “national egotism”. This phenomenon is gaining momentum even before the European elections due to populist movements, but also because of incorrect policies in the EU, especially as regards the rights of the majority, and not only of the minorities. He called on the European institutions to tell the truth and only the truth. Bogomil Nikolov, a representative of the EESC's various interests group, stressed that before the European elections all European institutions, organizations and citizens need to protect democracy because it is not a given asset but depends on the support of all of us.

The second discussion topic proposed by the ESC was about the social dimensions of a more solidary Europe. The main positions on the topic of the ESC resolution were presented by Plamen Dimitrov, a representative of the trade union group at the EESC. He called on the European institutions to get in closer contact with the citizens, to abandon the bureaucratic approach and to present the truth to them, because only then the institutions will receive support from the people. At the heart of his statement, Plamen Dimitrov set the principles of justice and solidarity on which all EU policies such as cohesion policy, agriculture policy, competitiveness policy, as well as the policy for the distribution of European funds should be built. He paid particular attention to the application of the European Pillar of Social Rights and stressed that there is still no European as well as national plan to implement this mechanism.

Georgi Stoev, a representative of the employers' group at the ESC, supported the position of an even more competitive Europe and gave an example of different policies and measures to Japan's experience. Professor Neno Pavlov, Vice-President of the ESC from the group of organizations with various interests, emphasized the challenge facing Europe in terms of preserving the model of solidarity and shared values.

More than 25 participants in the discussion presented their opinions and recommendations. These included representatives of academia and academic milieus, representatives of non-governmental organizations, experts, former ministers. They all united on the need for the EU to continue to develop on the basis of European values ​​and to be a guarantor of peace, economic progress and social justice. Participants in the discussion stressed that the differences between current Member States in certain areas must be overcome. They also noted that it is unacceptable to apply a double standard to smaller, weaker and more backward countries. The EU needs to carry out a number of reforms that will lead to even faster and more genuine convergence, the participants in the debates said. Support was expressed for the proposals in the two ESC resolutions on EU economic and social policy.

Representatives of the largest youth organizations in Bulgaria - from the National Youth Forum, bringing together more than 50 organizations in the country and a member of the European Youth Forum - from the National Representation of the Student Councils, bringing together more than 200 000 students in the country, as well as from Sofia secondary schools. The young people have stressed that they want to live in a European Union that is fair to everyone, with open educational systems and opportunities to study in universities of their choice. A very strong impression made their firm intention to return, work and live in Bulgaria after acquiring new knowledge and skills abroad. Young people have asked the EU to develop mechanisms for their participation in the European dialogue. They expressed their willingness to participate in discussions with organized civil society and to set out their ideas for the development of Europe and Bulgaria.