ESC: FOR BULGARIA THE ROAD TO THE EUROZONE IS THE ROAD OF REFORMS, STRENGTHENING THE ECONOMY, COMPETITIVENESS AND INCREASING PERSONAL INCOMES 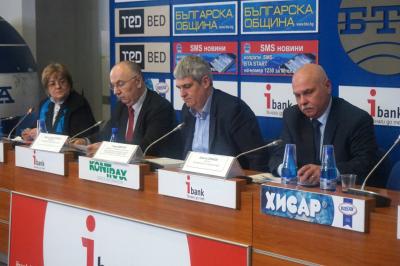 The position of the Economic and Social Council (ESC) that Bulgaria needs to accelerate its preparations for joining the Eurozone, adopted with the full agreement of employers, trade unions and other non-governmental organizations, is based on the fact that Bulgaria fulfilled all requirements and criteria and now is the time to make the first steps towards the Eurozone. The opinion was presented today at a press conference with the Bulgarian News Agency.

Bulgaria is now the focus of the EU's attention as the EU Council presiding state and diplomatically it can consolidate support for its application for the Exchange Rate Mechanism ERMII ), Prof. Dr. Lalko Dulevski, President of the Economic and Social Council, said at the press conference. Bulgaria has fulfilled all technical criteria. Now our goal must be the Eurozone, because there are different processes and reforms in Europe, and Bulgaria has to take its place among the countries that have adopted a common currency, he said. While we are in the ERM II, and then - in the Eurozone, our membership must be transformed from goal into a means of prosperity in Bulgaria. According to Prof. Dulevski, Bulgaria has nothing to jeopardize the EU, nor has it caused any worries to the union. Bulgarians paid the price to become part of it, and the efforts of the Bulgarian people must be properly assessed and supported by the other Member States.

Dimitar Brankov - ESC member and a rapporteur on the opinion - argued that “the need for Bulgaria to follow the steps towards the Eurozone will accelerate long-delayed reforms in the health care, education, income policy, etc. Bulgaria is ready for these steps because the country's finances have been controlled for 20 years by a currency board in its most restrictive form, the one that stabilizes the financial system. This is a unique situation because no other country has so far gone through the restrictive policy of such a currency board. Therefore, I think that our country is ready. The benefits of Bulgaria's inclusion in the Eurozone are many - from a reduction in overall systemic risk, easier access to credit, more favourable interest rates, increased competitiveness, more investment, additional guarantees on the deposit base, enhanced level of oversight of banks by the Bulgarian National Bank and the European Central Bank to increase the pace of convergence and to move closer to the average European levels. Entering the Eurozone, Bulgaria has a real chance to become a bridge between Europe, the Middle East and the Balkans, as well as a model for the development of the countries that will follow us,” Brankov said. “If we must compare our state to someone, it should be to the Baltic republics that have already walked this way to the Eurozone and did not suffer any shocks, although they had similar indicators,” Brankov explained.

Plamen Dimitrov, rapporteur of the ESC opinion, stressed that, in fact, a union and employers' agreement on the preparation of Bulgaria for joining the Eurozone has been in place since 2014, and it is based on the conclusion that the advantages by far outweigh the challenges. Now the moment is decisive for us. After hearing the Finance Minister's statement about our willingness to apply, as well as comments from EU actors, it is time to mobilize. We closely monitor the processes in the Baltic States precisely on income and inflation issues. And our conclusion is that people's fears are unfounded. Rather, they come from the lack of sufficiently objective information.

“Latvia, for example, had a 50% level of convergence (GDP per capita measured in terms of purchasing power compared to the EU average) in 2005, when it entered ERM. This indicator is close to our level now. A few years ago, ESC in its opinion even set the goal of reaching 60% convergence, but this level has not been reached yet. However, at the moment Bulgaria is at the same level of development as Latvia when it applied for the Eurozone waiting room,” Plamen Dimitrov said. The Baltic States stayed between 7 and 10 years in the so-called waiting room for the Eurozone. During its stay for about 10 years in ERMII Latvia has increased its convergence rate by 12 points. For Lithuania, this indicator of 53% at the entry into the Eurozone waiting room has increased by 22 percentage points to 75%. These are indicators related to income levels.

“Thus, we can make the analogy with Bulgaria and assume that our goals are achievable,” Plamen Dimitrov commented. There should be no assumption that our steps towards the Eurozone will be an obstacle to increasing personal incomes. On the contrary, these are the steps to increase the incomes of Bulgarians. Plamen Dimitrov also stressed that Bulgaria must fulfil its commitments for reforms in the labour market, education, health care, energy, etc., which will also have a positive impact on incomes. He also commented on one of people's concerns - increases in some prices. They are likely to be rounded up to the higher number, but this is the retail price of the cheapest mass goods, and it will not happen before the country's entry into the Eurozone, Plamen Dimitrov commented and pointed out that the average annual inflation rates in the most recent countries to join the Eurozone in recent years are from 0.3% to 1.4%.

ESC noted in its opinion that the public is still polarized about the adoption of the euro, so ESC calls for a broad dialogue with people, to inform them about the process itself, to explain the benefits and challenges to Bulgaria in order to reach public consensus on the country's membership in the Eurozone. Asked how long it will take Bulgaria to adopt the euro, ESC's answer is that we expect the government to demand and obtain green light in the summer of this year on the first preparatory part of the road to the Eurozone - ERMII, then the political will and the joint efforts, the clear plan for action in the process of preparation for the Eurozone will lead to our country's full readiness for the Eurozone.