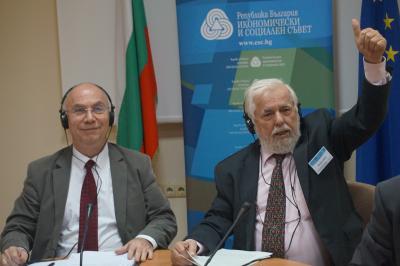 The most important emphasis of Bulgaria's EU Presidency is and should be economic and social cohesion. Cohesion within a united Europe is the most peculiar feature of this project, the President of the EESC said  and stressed that Bulgaria would have the full support of the EESC for insisting on the continuation of economic and social cohesion actions. Dassis reminded that in 1952, at the time of creation of the community, and later at the time of adopting the Treaty of Rome, cohesion on an economic and the social basis has always been a major policy. If  then there was no provision for the European Community to seek harmonization and cohesion in progress, hardly so many countries would have joined the project of united Europe, Dassis commented.  The EESC President also touched upon the so-called "brain drain", a process that, unfortunately, affects the least developed countries. At the same time, they have the greatest need to keep their smart and skilled people to speed up their development.  The "brain drain" is a phenomenon, which, according to G. Dassis, concerns not only individual European countries, but also the continent of Europe as a whole. Therefore, his recommendation, as well as that of the EESC, is to create national policies within the overall process of cohesion. The EU needs to make it possible for the major European universities in all countries to have enough money and to retain the best and most prepared people to carry out their projects in their home countries.

The EESC President assessed the work of the Bulgarian Economic and Social Council as" one of the most effective and convincing among the related civic European institutions. He answered to questions from ESC members about Brexit and its implications.  According to G. Dassis, everyone must be held accountable and comply with all commitments, incl. the UK.  The case of Brexit is a good lesson for civil society because it is becoming clearer that UK citizens have been victims of a distorted understanding and false facts about the EU.  Citizens in all countries need to be better informed and more aware of and appreciate the benefits of the EU, a peaceful Europe and greater cohesion. Then their assessment will be objective, G. Dassis commented. He also emphasized the need for a more rapid adoption of the draft European Pillar of Social Rights and noted the role of the Bulgarian Economic and Social Council in Bulgaria for the organized civic discussion on this topic in June this year, as well as the proposals made by the ESC, which were included in EESC's document.

ESC President Prof. Lalko Dulevski thanked G. Dassis for the visit and stressed that European issues have been one of the main lines of ESC's activities. He gave examples of adopted and future documents and consultations made by ESC - concerning the White Paper on the Future of Europe, the European Energy Project, the European Social Rights Pillar, the Future of Labour, Bulgaria's Eurozone Membership, CETA.

Both presidents stressed that the consensus - the principle behind the ESC and the EESC - is the most difficult but the only sensible and effective way to involve civil society in decisions about its future.