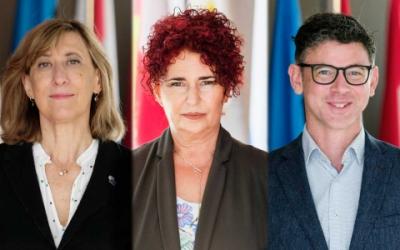 Austria's Christa Schweng has become the 33rd president of the European Economic and Social Committee (EESC) and the fifth woman to head the EU body representing organised civil society since its establishment in 1958. The two new vice-presidents elected to join her at the helm of the EESC are Giulia Barbucci (Italy) for budget and Cillian Lohan (Ireland) for communication.

The EESC appointed its new leadership on 28 October, on the second day of its three-day inaugural plenary session. This marks the beginning of the EESC's 2020-2025 term of office, with over 40% of its 329 members being new. Due to strict COVID-19 restrictions, the entire inaugural session is being held online with the exception of its opening session, which was held remotely but chaired in person by the EESC's oldest member, Raymond Coumont, from the empty hemicycle in the European Parliament.

Following her appointment, Ms Schweng said: This term of office will be marked by COVID-19 and, sadly, by times of uncertainty and economic and social hardship, in which businesses struggle to survive and workers lose their jobs. In the current context, more than ever, we need to join forces, develop a vision for a new, post-COVID-19 Europe and do our utmost to ensure that our Committee provides a powerful contribution to Europe's recovery and future resilience. This will go hand in hand with rebuilding a more united, effective and highly regarded EESC.

For this reason, the motto of Ms Schweng's new presidency is United for the future of Europe.

The new president vowed to act immediately to restore the EESC's reputation and rebuild trust in the institution after it recently reiterated its firm commitment to fighting harassment in the workplace.

We need a Committee that is united and meets the highest ethical standards, a Committee with an excellent image, Ms Schweng said, adding that the EESC's Code of Conduct for Members and the Rules of Procedure will be reinforced at the start of her term of office.

Since the EESC presidency changes halfway through the term of office, the tenure of the new Bureau headed by Ms Schweng, who takes over from her predecessor Luca Jahier, will last two and a half years, until March 2023.

The president's programme will be based on the following priorities, which are in line with her vision of a post-COVID-19 Europe that enables its citizens to thrive and live in an open and value-based society: a Europe that is prospering economically; a Europe that is socially inclusive; and a Europe that is environmentally sustainable.

The fourth priority is making sure the EESC plays a vital role in the Conference on the Future of Europe, which is an important initiative that should give Europeans a sense of ownership of their EU by enabling them to debate major EU topics, with the goal of improving the way the EU works.

The president's programme argues that sustainable development should become a mindset and a basis for a competitive economy, with nobody being left behind. The digital and green transitions should be mainstreamed into every policy area.

The elected vice-president for budget, Ms Barbucci, said: It is our responsibility to show European citizens that the EU and its unique social model can help find a way out of the crisis. In this delicate time, the EESC has a key role to play. We are the voice of organised civil society and social partners in Europe. Every day we work hard to promote democracy and develop a more participatory EU.

The new vice-president in charge of communication, Mr Lohan, said: EESC outputs are the result of our tireless work to produce valuable unique perspectives that, critically, have the support of different groups of organised civil society. Our work needs to reach the EU institutions loudly and clearly. And we will reach out in the other direction too – to our home networks, in an iterative process that will help us to design those solutions that will deliver for everybody, and to lead by example, putting active participation back into participatory democracy.

The president will present the programme during her speech, which will be delivered remotely at the inaugural plenary session on 29 October. It can be followed here.