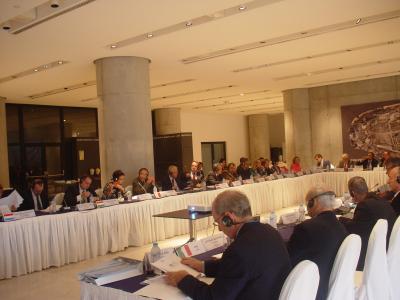 The ESCs of 16 European countries and of the European Union, meeting in Athens, on 14 and 15 November 2013:

Note that the global crisis, which is hitting Europe particularly hard, is also revealing a crisis in our democratic institutions. Many political parties seem in difficulties in the face of the spectre of populism. National politicians have a tendency to blame Europe as a scapegoat for national shortcomings.

Point out that, however, that Europe is not the problem but an essential part of the solution to problems common to all Member States and that we need to invest in a positive agenda for Europe, restoring the balance between the social and economic aspects of European integration.

Stress that this agenda should include an adequate balance between the national sovereignties and enhanced European governance on key issues that would restore the trust of European citizens.

Affirm that Europe is facing not only a financial crisis but also the need to effect a political, economic and social transformation, based on sharing and against the backdrop of a global reshuffling of cards.

Note that the Europe 2020 Agenda remains of relevance.

Recognize the urgent need to revive sustained economic growth and put in place policies to counter the massive rise in unemployment, particularly among the young, and the poverty that this carries with it.

Recognize the need for a balanced and responsible approach at European level on
the issue of immigration that now directly affects Member States in the Mediterranean.

Recognize the challenges of maintaining the sustainability of our planet in the face of climate change and the need to manage food balances for a growing global population.

Reject the notion of a multi-speed Europe and support a more integrated, solidarity-based Europe.

Call for a new social contract to be put in place, based on a social blueprint that is shared by the social partners and the various stakeholders that make up civil society. No radical and acceptable sea-change is possible without stronger social dialogue.

Welcome the Common Declaration from the EU social partners adopted on 24 October 2013 on their involvement in European economic governance. The framework of actions on youth employment of June 2013 is another sign of hope in this respect.

Believe it is the job of the economic and social councils to organise the broadest possible social and civil dialogue, giving priority to long-term responses and in particular the expectations of younger generations. The aim is to induce policymakers to ask the right questions in order to identify answers that go beyond mere remedial action and instead embrace a forward-looking vision.

Agree, with six months to go before the European elections, to work together to raise awareness among European citizens of the risks involved in any return to the excesses of populism and to propose joint responses to the cross-cutting issues set out below:

·        the digital revolution and upcoming innovations that will form the basis of our shared economic future;

·        European energy policies that secure the future of European production and social wellbeing without compromising compliance with our climate commitments;

·        participatory initiatives that give a voice to grassroots citizens and for which our institutions are in a position to act as conduits in the interests of democratic renewal;

Engage to hold, in 2014, a number of thematic meetings on these issues in order to demonstrate that Europe is the solution, not the problem. The 50th anniversary of the Austrian ESC in March will be a good opportunity in this regard. A further high point in 2014 will be the next meeting of the presidents and secretaries-general of the European ESCs hosted by the French Economic, Social and Environmental Council (ESEC).

The Greek Council will hold a thematic event in 2014 under the auspices of the Greek presidency and all councils will be invited to take part.