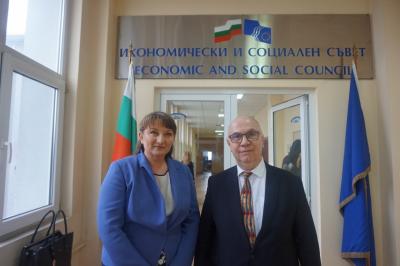 The Bulgarian ESC held a consultation with the Minister of Labour and Social Policy and shared initial comments on the Communication of the European Commission to the European Parliament, the Council, the European Economic and Social Committee and the Committee of the Regions - A Strong Social Europe For Just Transitions.

In a letter sent specifically to the ESC, the Minister of Labour identified the topic of discussion with the ESC on the EC Communication as initial comments and reflection on building a strong social Europe for just transitions, as well as on the roadmap for implementing the European Pillar for Social Rights (EPSR) as a guarantee that the transitions to a climate-neutral economy and digitization, as well as demographic change, will be socially just.

In the discussion, ESC members commented on both the design, objectives, structure and scope of the EC Communication and the specific issues raised in it. It was generally agreed that the Communication was very broad, ambitious and raised serious questions about the future development of Europe, but it was also a sign that the EU would create an EPSR roadmap. The consistent and principled implementation of the EPSR will ensure a just social transition to a new stage of Europe's development, also linked to the Green Deal, ESC officials say. In the discussion, more than 20 ESC members mainly sought the Bulgarian projection of the Communication on a strong social Europe for just transitions.

ESC members addressed topics such as linking the objectives of the Green Deal with financial backing in order to achieve the positive convergence required, especially for Bulgaria. Questions were raised about the stability of the social systems in the context of demographic trends, the necessary changes in the labour legislation due to the processes of digitalization, the development of rural and small and medium-sized enterprises, young people and their realization. Prof. Lalko Dulevski, PhD stressed the fact that ESC has adopted more than 100 acts so far, and more than a third of them concern European issues. He also stressed that the debate on the Communication should continue because of the scope of the proposals and initiatives of the European Commission and assured the Minister of Labour that ESC would be an active participant with its positions and initiatives to achieve more solidarity and justice in Europe.

Minister Sacheva assessed the consultation with ESC as useful and encouraged ESC to actively participate in the discussion on the future of Europe. She stressed that the formation of positions on the Commission Communication is a crucial moment for the future of the EU, but it is crucial for Bulgaria's further development, due to different country specificities. According to the Minister Sacheva the implementation of the European Social Rights Pillar and the new Green Deal are linked with many changes that must be based on the European human values for solidarity and justice.