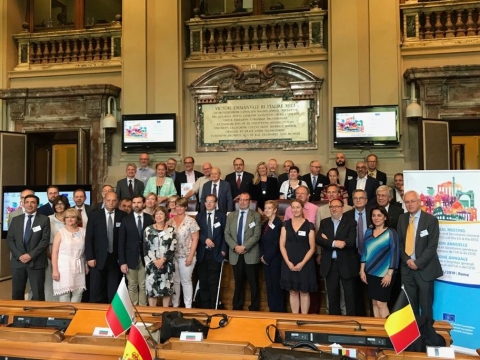 On 13 and 14 June 2019, the European Economic and Social Committee (EESC), together with the Consiglio Nazionale dell'Economia e del Lavoro (CNEL) organised the yearly “Annual meeting of the Presidents and Secretaries-General of the Economic and Social Councils of the EU and the EESC” in Rome. The topic of this year's conference “The ESCs role in sustainable development and the implementation of the Social Pillar” reflected the urgent need for an economic and social transformation towards sustainable development. The actual situations in Member States were highlighted and best practise examples presented. The in-depth debate with the national ESCs led to the following conclusions:

The presidents and secretaries-general of the National Economic and Social Councils of the EU (NESC) and the president of the European Economic and Social Committee (EESC) met in Rome on 13 and 14 June 2019. They present the following conclusions, which convey a clear message of support for the European project and for the Sustainable Development Agenda, since they are, in the end, two sides of the same coin.

This year's annual meeting comes at a crucial time, just about some three weeks after the European Parliament elections, which strengthened its democratic legitimacy, and on the eve of the relevant decisions on appointments for the next institutional cycle and the adoption of the 2019-2024 Strategic Agenda for the Union.

The presidents and secretaries-general of the NESC and of the EESC agree that the 2030 Agenda, as adopted by the United Nations on 25 September 2015 and endorsed by the European Union, has to be the undisputed and overarching priority of the European Union for the next decade.

Following an in-depth debate with the delegations at the Annual Meeting of the Presidents and Secretaries-General of the National ESCs of the EU, the Presidents of the EESC and the CNEL:

- The Reflection Paper "Towards a Sustainable Europe by 2030" adopted by the Commission in January 2019 forms part of the EU's firm commitment to deliver on the 2030 Agenda and to champion sustainability.

- The European Parliament's March 2019 "Annual strategic report on the implementation and delivery of the SDGs" fully endorses this political stance and captures the required sense of urgency. It underlines that sustainable development is one of the EU's fundamental objectives, as laid down in Article 3(3) of TFEU, and is closely linked to European values. Lastly, the report stresses that the Union should renew its commitment to being a global front-runner in implementing the 2030 Agenda and urges the Commission to draw up an ambitious, overarching and all-encompassing strategy for the implementation of the 2030 Agenda.

- The Council in its Conclusions of 9 April 2019 "Towards an ever more sustainable Union by 2030", urges the Commission to draft a comprehensive implementation strategy outlining timelines, objectives and specific measures that reflect the 2030 Agenda, to be presented in 2019.