Bulgarian ESC's activity report for 2016 was discussed by the Parliamentary Committee on Labour, Social and Demographic Policy 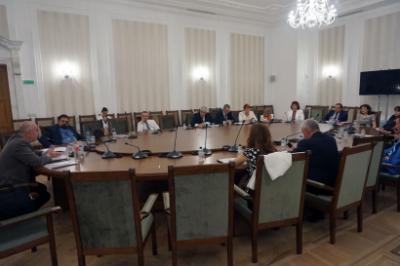 On 7 June, at its meeting, the Parliamentary Committee on Labour, Social and Demographic Policy examined the Economic and Social Council's Activity Report for 2016

ESC President Prof. Dr. Lalko Dulevski presented briefly the activities of the ESC focusing on the main acts adopted during the year, on the consultations held during their discussions as well as on the regional and national discussions in the country.

He pointed to the three main topics on which the ESC has been working consistently in recent years - the European Semester and the accompanying documents, unemployment and especially long-term unemployment and the problems of young people and their employment and social realization.

Professor Dulevski highlighted the topic of young people, stressing that it has important implications for society as a whole, and ESC consistently identifies the problems and seeks solutions. Data from the latest ESC analysis of the migration attitudes of young people completing their secondary education in 2016 confirm the trends of previous ESC studies. The alarming conclusions of the analysis are that about two-thirds of secondary school graduates have the intention to leave their place of residence, and three-quarters of them have excellent academic results. The ESC President pointed out that the inability to find a good and well-paid job in their place of residence as well as the unsatisfactory quality of education, especially for the excellent students, are the the main reasons for students' migration intentions.

By means of the surveys and analysis of migration attitudes, ESC warns of the worrying prospect of depopulation of villages and some regions, Prof. Dulevski said and stressed that the ESC defines internal migration as a serious challenge for our country. In 2016 ESC initiated a series of meetings in Sofia and cities in the country with graduates, local authorities and business, the ESC President also said. He identified these meetings as a bridge between businesses and local government on the one hand and young people on the other. At these meetings participants exchange information on the prospects and future development of regions, about opportunities for young people to work in the coming years.

Professor Dulevski informed MPs that the model of consultations with experts and representatives of the institutions in the drafting of acts continues this year. He gave as an example the ongoing consultations at the ESC on the forthcoming acts of the Council concerning vocational education and training, early school leaving, the possibility of Bulgaria joining the Eurozone, etc.

In 2016 too ESC cooperated actively with the European Economic and Social Committee (EESC) by organizing with its assistance several public consultations in Sofia, Prof. Dulevski indicated. The consultations were attended by the Chairman of the Parliamentary Commission for Labour, Social and Demographic Policy - Dr. Hasan Ademov, ministers, deputy ministers, state government experts.

The ESC President highlighted the discussion with civil organizations of the draft of the European Social Rights Pillar in Sofia last autumn. ESC supports the opinion that this project should apply to all EU Member States and not just to the Eurozone countries, he said. This position was defended by both the Bulgarian government and the EESC opinion.

In conclusion, Prof. Dulevski informed MPs that this year, ESC is drafting acts for the European Commission's White Paper and the future of the EU, for the prospect of Bulgaria applying for the Eurozone, for the European Social Rights Pillar, which are also largely related to the upcoming Bulgarian EU presidency .

The Chairman of the Parliamentary Committee, Dr. Ademov, congratulated ESC on the results of its activities and proposed to continue the discussions on the priorities of Europe and Bulgaria in joint workshops this year.

All members of the committee accepted ESC's Activity Report for the past year.